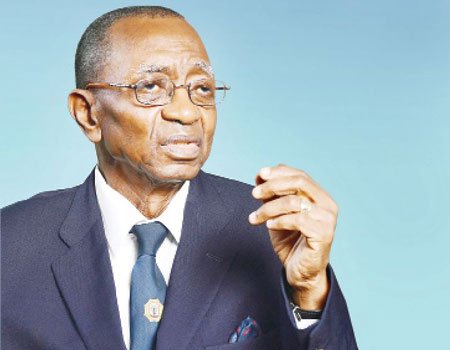 •Bashorun J.K. RANDLE’s Tribute To Him

At the risk of stating the obvious. Professor Kayode Oyediran’s 80th Birthday provides us with an excellent opportunity to acknowledge his superlative achievements as a medical doctor, academician, administrator and author as well as his undisputable leadership qualities. indeed, he is a rare gem.

We must however recognize that the gem has been sparkling for at least six decades – going back to 1957 when our path crossed at King’s College, Lagos. He was in the Sixth Form and had gained admission from Methodist Boys High School where his father was the Principal (Headmaster.) King’s College only admitted the best students from all over Nigeria following a fiercely competitive and transparent process.

Even amongst that excellent crop, the celebrant stood out regardless of the fact that he was considered to Hyde Johnson’s House which was reputed to be the warehouse for trouble-maker.

He was not only an exception, he was exceptional. His academic performance was flawless and even amongst his classmates who for some strange reason (perhaps an epidemic) all wanted to be professors of medicine or engineering!! Strangely, most of them ended up achieving their goals almost effortlessly.

As for Professor Oyediran, the academic prizes and professional laurels came in torrents and the pinnacle of his career was his tenure as the head of the Vice – Chancellor of the University of Ibadan during a most turbulent period. His survival strategies and tactical maneuvers must have been acquired after he left King’s College. Regardless, they served him and combined to enthrone him as a household name in Nigeria and beyond – in his own right.

My tribute would not be complete without acknowledging Professor Oyediran’s strength of character and his conflicting loyalty to his friends (and I count myself as one of them) regardless of the prevailing circumstances.

Most endearing are his humility, compassion and generosity which were already his trademark sixty years ago. Only those who are close to him would appreciate his sense of humor which enabled him to excel with his feet firmly planted on the ground which he has been oscipating in the formidable orbit and constellation of superstars – starting with the Oyediran family where he is the eldest, and the Awolowo dynasty (his in-laws) and Vice – President Yemi Osinbajo as well as a son – in – law who is both a chartered accountant and tax collector! I believe that I am entitled to bragging rights on account of my long association with the celebrant. What you see is what he really is.

His most unassuming but take my word for it __ he is deep. Otherwise, he could not have survived in Ibadan for all those years. I have only recently discovered that like me he is related to the Layeni family through his mother and his sister is married to my cousin, Engineer Soji Morgan.

The celebration of Professor Oyediran is not driven by frivolity or collective self-indulgence. On the contrary, it provides us an excellent opportunity not only to acknowledge his international reputation as a scholar but even more compelling to address the agonising question that is regularly thrown at us at international for a – how come a nation that has produced so many outstanding intellectuals is hobbled and crippled crisis after crisis in a sea of corruption and suffocating incompetence?

Furthermore, we are living witness to the assault by successive military governments on the academic community in addition to regular doses of humiliation. Indeed, one of Professor Oyediran’s predecessors in office, Professor Oritsejomi Thomas, Vice-Chancellor of University of Ibadan was removed from office on the eve of the convocation ceremony to which he had invited eminent foreign dignitaries and scholars.

To add insult to injury, lecturers and professors were summarily ordered to vacate their residence within the University campus.As a consequence, many of our nation’s most eminent professors took refuge in foreign lands in order to ensure their safety and adequate financial reward.It is to Professor Oyediran’s eternal credit that he remained firmly in Ibadan in defiance with only the occasional sojourn out of the country to attend conferences and refresher courses.

While we are at it, we may just as well spare some time to reflect on the spurious accusation that Professor Oyediran’s generation failed the nation and by extension compromised the future of the succeeding generation. Ironically, the view of Professor Wole Soyinka, the Nobel Laurette must have been misconstrued. Professor Soyinka in his younger days paid a heavy price for his confrontation with politicians.

He denounced the government of Western Region, which he considered illegitimate, on radio. His reward was incarceration. What further proof do we require of evidence of boldness and sacrifice? We can only prevail on the next generation to present their own evidence of patriotism, tenacity of purpose and courage.Indeed, the likes of Professor Oyediran are entitled to reparation by a nation that has failed them.

There are two components to reparation. First of all, the nation must mend its ways and justify the sacrifices of previous generation by actualising the potentials of our nation for greatness. We do not belong to the category of the non-runners (or the also ran).

The other half of the reparation is for the powers that be to compile the list of those who have been found worthy in character and learning for nomination as Ministers, Special Advisers, Ambassadors, Legislators, Heads of Parastatals etc.