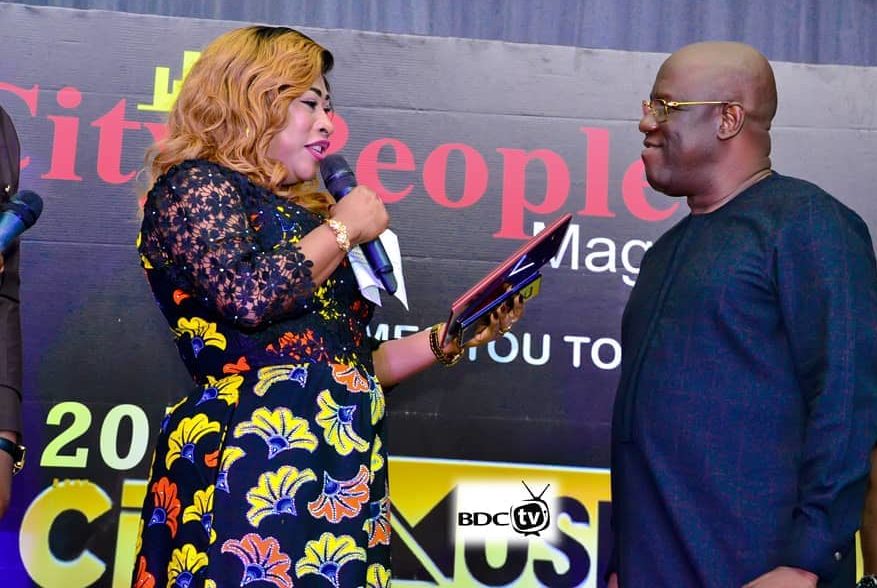 The revolution in the Nigerian music industry that birth different international opportunities for the new acts that are making wave today can be traced to the efforts put in by Kennis Music owned by Kenny Ogungbe. In the days of Primetime Jamz, Keke, D1 and ID were the trio that made things happen… It was glorious for many of the new stars in the house to share the table the same venue with these living legends. Many could not hide their feelings as they were spotted all over the brothers taking selfies and exchanging contacts.

“This suite is making me feel like a pastor”. That was MC Pluto’s statement as he took permission to change his dazzling looking suite to something more “suitable”. Coming back upstage, MC Pluto was adorned in glory as with his blinging black on black attire. This is more like it! He exclaimed as he mounted the podium.

Gongo aso crooner, Adigun Alapomeji, popularly known as 9ice was greeted by the tunes of the song that gave him his big break even from the red carpet. His intention was actually to sneak in, he retorted but there is no way a star of his degree of shine would sneak into an event organized by Nigeria’s premier soft-sell magazine, City People. Dressed in a simple native outfit, 9ice was seen off to his VIP seat by the ushers but not without his teeming fine struggling for a snapshot with the superstar.

It was really a comic war between DJ Khayslay and MC Pluto as they both had a call and response jokes session. Wondering how that went? MC Pluto would throw a question a comical question at DJ Khayslay and every time he does that, Khayslay often responds with a short song or voiceover that perfectly answers the question. The audience had laughed out their ribs before MC Shogbe came in to rescue the situation.

Afro Juju legend, Sir Shina Peters who recently celebrated his 60th birthday also came to celebrate and be celebrated on the night of unexplainable musical fun at the sidewalk lounge. Popular known as SSP, Sir Shina Peter’s arrival required a standing ovation and it was duly given to him by MC Pluto and the entire audience. He majestically walked in, greeted his fans, and a warm hug to SK before he was being led by the ushers to his reserved VIP seat.

MC Mario is a popular OAP on Jordan FM. Give it to him, this young dude is good at what he does and the audience had more than what they bargained when he handled the mic. He brought a different flair entirely to the show. Starting with Baba Keke, 9ice and others, his jokes revolved around people and events which brought out the creativity in him, unlike other comedians who will climb the stage with stereotyped and rehearsed jokes. The audience requested for more but time wouldn’t permit Mario to make them laugh louder than he already did.

To open the floor of award plaque presentation in an event of this magnitude, no other celebrity than the legend himself, Kenny Ogungbe who has made several stars in the industry would fit-in. He was gloriously accompanied by another silent achiever in the industry, Jonliz Record boss, Prince Olaniyi Karonwi. Those who received their plaque from this duo are Alexis Promotion UK which won the International music promoter of the year, Seye Pounds of Sound City FM, as the male OAP of the year, Arewa music promoter of the year which went to Panash, Arewa song of the year won by (Arewa) a song by Pennywealth. Yaf records won the Arewa best record label of the year while Miles was named the Arewa most promising male artiste. The Arewa Reggae Dancehall Artiste of the year award went to Osharee while Divadi was named Arewa

Sir Shina Peters may not be known by many children of this generation but he definitely rocked the showbiz world during his time and he is still doing so but in a very classy manner. His evergreen Ace album bagged the 2019 CPMA recognition award after 30 years. SSP proved that he is still very much in the game as he performed his ace album for several minutes before dropping the mic.

Pretty Mike of Lagos is Entertainment Personality of the year

Lagos male celebrity, Pretty Mike was named the entertainment industry personality of the year. He appeared in a simple but classy white-gold plated designer shirt. Pretty Mike of Lagos was well received by his ever-cheering female fans. He stole the show amidst some delectable angels who were all over him as he walked down the podium after receiving his plaque.

Prospa Ochimana is a popular gospel artiste in Nigeria. The Kogi born minister was nominated for City People’s Gospel Artiste of the Year in 2018 but lost out. He became very popular in the gospel music scene for his single “Ekwueme” and he eventually won this year’s edition. He is the convener of the yearly Festival of Grace concert.

The next set of awards were presented by the legendary Sir Shina Peters and Don Sylvester Records (DSR) boss, Chief Don Sylvester Nweke presented the next set of awards to the following winners; Female music artiste of the year. Others are Arewa music best promoter, Isa Madaki (MDK), Zakky Azzay got the 2019 CPMA recognition award. Classic was named Arewa artiste of the year. Cubana got the nightclub of the year award while Base One got the 2019 CPMA recognition award.

DJ Big N is a Nigerian hip hop DJ. As part of Mavin Records, DJ Big N has supported several of the label’s top-billed acts, including supporting Tiwa Savage on her first American tour. He has released several Mavin themed mixtapes, including the “Mavin All Stars” mixtape, the ‘Surulere Mixtape Volume 1’, and the “ENERGY Mixtape”, among others. His choice as the winner of the 2019 CPMA DJ of the year cannot be contested as members of the public voted for him massively. DJ Big N didn’t mince words after receiving his plaque from Keke Ogungbe and Olaniyi Kartonwi. “Baba Keke you are my inspiration, I am dedicating this award to you because you have made a lot of stars including myself,” he said.

Mrs Oluwaseun Karonwi is the CEO Winlas Nig Ltd., and the wife of Jonliz Records Boss, Prince Olaniyi Karonwi. She became an instant superstar as she damned all protocols, climbed the stage and rocked the ace dance step with Sir Shina Peters himself. From the way she accurately got the steps, you could tell that she had danced it so well when she was much younger and Afro Juju was in vogue.