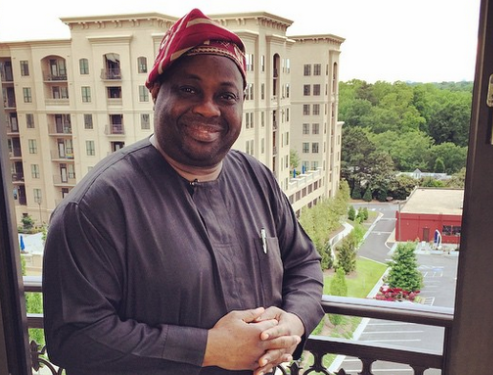 Having imparted values to beneficiaries in various spheres as an actor, journalist, motivational speaker, publisher, mentor and businessman; the CEO of Ovation International, Bashorun Dele Momodu, has added a new diadem to his trailblazing feats by launching three books on Wednesday, July 10, 2018.

The books which were written in the honour of the late uncrowned  president of Nigeria and winner of the June 12, 1993, Presidential election, Bashorun MKO Abiola, included a collection of Chief Momodu’s articles for more than 20 years on the back pages of ThisDay  entitled: Pendulum I & II; while the third which was entitled: Fighting Lions had in it, the untold stories of Bashorun Dele Momodu’s presidential campaign, why he lost the 2011 presidential election and lessons learnt.

Held at the Nigerian Institute of International Affairs, Victoria Island in Lagos, the event was undoubtedly top notch as it had several prominent Nigerians in attendance. They had many good tales to tell about Chief Momodu especially, on his loyalty to close friends and associates.

Anchored by a master class presenter and stand-up comedian, Gbenga Adeyinka, the 1st, the event left those who had not really met Momodu wondering how such an individual could pool the calibre of people present. The first noticeable dignitary was the wife of the immediate past Ooni of Ife, Oloori Ladun Sijuade, who did not only come to show solidarity, but also expressed love and profound gratitude to the author for his support for the royal family in the past.  Astute businessman and billionaire, Aare Razaki Okoya, and the wife of the Nigerian High Commissioner to the UK, Mrs Modupe Oguntade were there too.

ENTERTAINERS ADD CLASS TO THE FUN

Being an entertainer per excellence and one of the biggest promoters the Nigerian entertainment industry, veteran actors, hosts of TV programmes and celebrities came to show support for  one of  their own, Bashorun Momodu. The likes of Richard Mofe Damijo, RMD, Rachael Oniga,Tunji Alapini and host of others more were equally in the building.

Known as a man who has deep hatred for bad governance, Pastor Tunde Bakare, who has been passionate about seeing democracy thrive in the country was saddled with the responsibility of delivering the key note speech entitled: “The pen is still mightier than the sword”. He did not mince words when he expressed how the doggedness of Mr Momodu and several others saw democracy return to the country, after the annulment of Africa’s freest, fairest and most credible election in 1993.

He says: “From now on, anytime the name of the late MKO Abiola GCFR is mentioned with full honours, it’s a honour first to the men who fought for the man, who paid the supreme price to pave the way for Nigeria’s democracy and then to the heroes, and heroines who stood behind him including the members of the fourth estate of the realm, who marshaled the written and spoken words against tyranny.”

Being an ardent follower of the late Chief MKO Abiola as a staffer, friend and close ally, Chief Dele Momodu did not have problems with bringing to the venue members of  Abiola family. One of the wives of the late democrat, Dr Doyin Abiola, came in company of two other children of MKO, Lola Abiola Edewoh and Wura Abiola to show support and gratitude to the man, who stood by their hero even several years after death.

The auditorium was filled to the brim with the crème-de-la-crème of the society. Time would, however, allow only a few to participate in the official launching of the books. Pendulum I was officially launched by Mr Femi Otedola, followed by Pastor TundeBakare, Hajia Bola Shogaya, Governor Ambode, Aliko Dangote, Mike Adenuga, former governor Peter Obi and Reverend  Mother Esther AbimbolaAjayi.

The Shuga Band was rightly on ground to add entertainment to the glamour the event had. A blend of afro jazz, highlife and hip hop left guests awed as the event went through different high points till the very end.