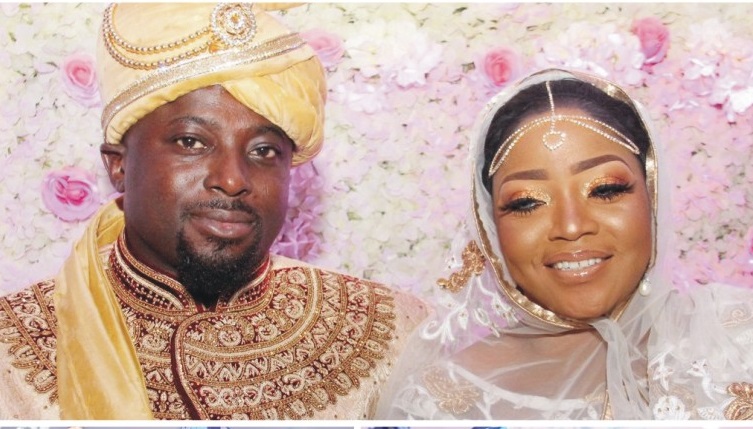 +Those Who Wore Aso Ijo

Though the star-studded wedding of Abidemi Alli-Balogun, the son of Lagos King of Boys, Otunba Dapo Alli Balogun, has come and gone, but many can never forget the array of beautiful women and babes, who dazzled at the grand wedding as Abidemi signed the dotted lines with his love, Adebimpe Yissuff.

Though, it was a blush pink affair, but the bride, Adebimpe’s friends spotted fushia pink lace, which was matched with fushia pink headgears, while some celebrities also spotted teal green lace.

Many Lagos society women turned their fabric, supplied by Muyak and Opere fabrics, into beautiful styles, which fitted their body shapes perfectly. Of course, many also made sure their make-up artists accompanied them to the venue as they changed their clothes as many times as possible, Eko for show of course.

One of the celebrities, who attracted attention at the event was the bride herself, Adebimpe Alli Balogun. One needs not be told that she knows how to make heads turn as she stunned all day. Her choice of jewellery were all gold and diamond as she matched them with her 6 attire for the event. Many couldn’t take their eyes off her flawless skin, which made “Demi Williams” face glowed all day.

Give it to Lagoon plaza society women, they were fully on ground as they wore the blush pink lace picked for the party. Of course, many were not surprised that they all looked gorgeous for Otunba Dapo Alli Balogun son’s wedding. Their styles couldn’t be overlooked as they spent big to look their best. Among those whose styles and look waohed many were Alhaja Fatimo Opere, Alhaja Bola Ogunsanya,   Alhaja Fashina, Bimbo Giwa, Alhaja Fausat Oluwole, Ayoka Muiz, Atinuke Beide, Alhaja Fusho, Alhaja Sidikat Olaitan, Alhaja Mujibat Osibogun, Ayimba Yemisi Fasawe to mention a few.

These celebrity women were cynosure at the event. This is not just because they are beautiful, but because of the choice of jewellery they wore. Most of them are friends of Alhaja Bukky Alli Balogun, the wife of Otunba Dapo Alli Balogun. Some of her friends were in white attire before they later changed into the blush pink lace. While many thought that was all, they shocked many a few minutes past 6pm as over 30 of her friends stepped out in a special burnt orange luxury lace called “Aso-Ijo”. Aso-Ijo is always for select friends and it always adds glamour to Lagos parties. The orange lace was supplied by Hajia Adejoke Ogedegbe, who runs Morkals fabrics Aso-Oke, a subsidiary of Morkals fabrics run by her mum, Alhaja Morufat Kalejaiye. Many of those, who rocked the special “Aso-Ijo” rocked it with luxury diamond stones and 18-carat gold. Among those who adorned the jewellery were Alhaja Bukola Alli Balogun and her younger sister, Otunba Folasade Risikiquat Adunni Adesoye, the diamond merchant herself. Their diamond set made many turn their heads. So, also was Alhaja Peju Muraino, her Ruby diamond kept talking while the event lasted.

When Mrs. Kemi Nelson stepped in a few minutes past 4pm for the grand reception of Otunba Dapo Alli Balogun son’s wedding, many guests couldn’t helped, but admired her flawless skin and her signature headgear. She was the mother of the day and she spent many hours at the head table with the groom’s father.

Alhaja Morufat Obanikoro, the wife of Senator Musiliu Obanikoro, was one of the celebrity women, who rocked the teal colour aso-ebi. She came in a few minutes past 5pm. Though, she spotted iro and buba just like Yeye Abike Animashaun, but their choice of 18carat gold was one of the rare collections. Soggy’s boss, Joke Sogunro, was also in teal colour lace picked as aso-ebi. Among other celebrities who dazzled at the event in the blush pink were: Alhja Aolat Ben Cash, Yeye Bewaji Ayo Julius, Mrs. Ronke Adeniyi-Jones (CEO of Topshop shoes in Ikeja),  Mrs. Sola Sosanya, Mrs. Yemi Adesoye, Olanike Dawodu, Mrs. Benny Sanda, Hajia Aminat, Alhaja Soffy Araga Sosanya, Fatimo Moore, Aminat Moore, Rashidat Moore, Alhaja Tai Elemosho, Alhaja Risi Gold among others.

We can never forget to tell you about the luxury 18carat gold that Lagos celebrity women rocked for Dapo Alli Balogun son’s wedding. We are talking about Erelu Tola Solomon, Joko Adeusi, Oloori Sekinat Elegushi, and Mrs Olaide Olohunwa, the pretty young babes behind one of the most sought-after fabric stores, Fabrics4elites. Their jewellery were not the regular ones you see around. They are off rack collections of p18carat Italian gold.  Mrs. Olohunwa has also taken fashion a little bit higher as  she embellished her blush pink lace with multi-colour beads, which transformed the lace totally.