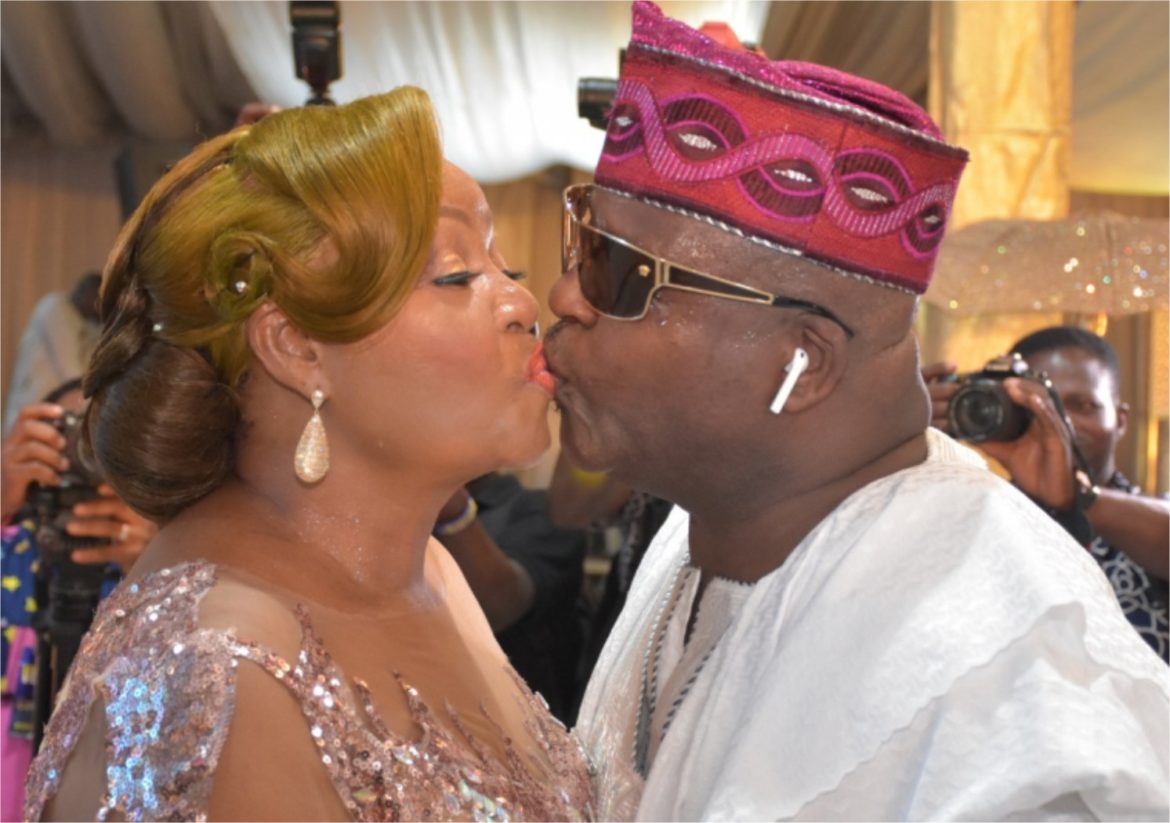 •Details Of The LAGOS Party

It was loud in Lagos penultimate weekend when all road that led to the busy Lagos commercial Hub, Ikeja was full of activities as Lagos society woman, Sammie Peters hosted the crème de la crème to her 60th birthday on Saturday, Jan 11th 2020. She is the pretty wife of Sir Shina Peters. The superlative birthday reception took place at. Time Square event centre. City People’s Society Editor, TAYO FAJORIN OYEDIJI.

THE DIAMOND “BIRTHDAY GIRL” LOOKED BEAUTIFUL FOR HER DAY

Sammie Peters is a charmer and this showed in all of her dressing for the day. She looked extremely beautiful for her day, very happy and soaked herself in praise at the party. She never dresses loud but wear quality and expensive apparels. She stole her show on her day when she stormed the party in a customized all stoned nude colour tulle lace sewn into a dress and she matched it up with gold accessories. She also opted for an 18k karat gold earring which complimented the outfit. She changed her angelic look at the reception when she stunned in another pink lace matched with magenta coloured headgear. Sammie Peters was the cynosure of all eyes on her day as every attention was on her.

WHAT YOU DON’T KNOW ABOUT SAMMIE PETERS

If you have never come across the “birthday girl”, you will not know how pleasant she is, and so, does she look when you see her. Sammie Peters to many people is an amazing being, she is well-loved amongst her friends and there is practically no one who has come close to her that will not say a good thing about her. This was evident at the party when many of her close friends came out to talk about her goodwill. Sammie Peters is from a popular Lagos Island family in Lagos and well blessed with successful siblings and children who are doing well in their respective fields. She is well schooled and got married to Foremost Juju maestro, Sir Shina Peters in 1995. She is the proprietress of Intellect Stars Montessori School and Samstars designs.

WHEN SAMMIE AND SHINA DISPLAYED LOVE IN PUBLIC

The day would just have been mistaken for a wedding anniversary because of the public display of love shown by Shina and Sammie Peters. Many guests had a fun-filled time at the party as the celebrant and her husband took us back the memory lane of a new couple who just tied the knot. They were engaged in hugging spree and got emotional by kissing each other to the admiration of all. Shina and Sammie Peters have been together for over 3 decades and their love keeps getting strong. No wonder, Shina was all over the hall welcoming guests to make sure they had a swell time before the arrival of his wife. Despite all the odds, they have both remained in marriage and made it work for 25 years. In their interviews, Shina Peter reveals why he could not have married anyone else, “Choosing my wife was destiny; it was not my making or hers. We were destined to be together and I feel everyone has someone destined for him or her. When I think about the fact that I am happily married, it is like a miracle”. Sammie also testified in one of her interviews in 2014 on how they first met 35 years ago. “We actually met in 1981 in Lagos, we lived in the same neighborhood and it was love at first sight. He was a very young and intelligent man but very ambitious towards his career. “Of course he was a budding musician with lots of attention here and there but in 1982 we did our traditional marriage and from there the long journey started, we eventually did our white wedding in 1995. It was not an easy period, so many things happened in between that time but love conquered all” she further said. Their love story is one of the most interesting love stories in Nigeria’s music entertainment industry and through it all Shina and Sammie Peters have remained inseparable.

THE CLASSY RECEPTION WAS AT TIME SQUARE

The classy reception for the diamond birthday ceremony took place at Time Square Event Centre, Lagos. This was the best option for the Peters as many of their friends trooped in massively to celebrate their big day. The hall was very colourful and give it to the foremost event decorator, Victoria F, she outdid herself in a big way. She is one of the close friends of the peters and she gave her all to make sure the venue looked heavenly. It was a gold affair and everywhere looked golden because of the décor.

MANY SOCIETY WOMEN STUNNED IN THE REIGNING SWIFT GELE

Looking from left to right, one thing that is common amongst the women who slayed in the Aso ebi and gele is the particular style of headgear in vogue, it is called the swift gele. Many people have shifted away from tieing the conventional round gele, and they gave us a new twist with the Swift Gele. It readily sits well on them and made them look more beautiful.

The President of the Association of Juju Musicians of Nigeria, Queen Ayo Balogun stormed the party midway. She is one of the friends of the celebrant and also owning to the fact that the celebrant’s husband is also one of the foremost juju musicians in Nigeria. She also slayed in the gold Aso Ebi and show her kind gestures as she distributed many gifts to guests. She led other juju musicians to the party, sighted were Mega 9’9, Titi Oguntoyinbo, Adele Taiwo and many others.

These two are very close friends and their friendship has spanned over 40 years. The beautiful, chubby mother, Kaita lives big in London and her close friends, Kemi Akala was the former First Lady of Oyo State. They are highly influential within the social and entertainment scene in Lagos and London but Kaita does not joke with her high profile corporate job in London. They adorn the best apparel money can buy and flies in and out of London at wills. They were sited together and partied all through. They both came all the way to honour Sammie Peters and her husband who is more like a close-knit family with them.

If you are close to these two women, the celebrant and Lagos society woman, Radeke Kupoluyi, then you will notice that there is a special bond that exists between both of them. Let us tell you authoritatively that they are related as close-knit families. They have been together for over 25 years and it was Sir Shina Peters who stood as her husband’s father during their wedding so theirs was a deep relationship from the onset.No wonder, Radeke was part of the planning committee who planned the classy birthday and she was also up and doing on the day. She was seen distributing gifts as well to many guests. She is one of the celebrity women who rock the Lagos party scene. She is the stylish boss of the thriving popular Radek stores in Alde Market and Allen, Ikeja. She was at the party with over 15 of her friends who dazzled in Aso Ebi.

SAMMIE’S ELDER SISTER UP AND DOING

What do you expect from an elder sister when her sister is having a party? Sammie Peters’ elder sister, Hajia Ganiyat Danjuma was at her best. She came to the party with her retinue of friends and catered for all of them. She made sure her younger sister had a filled day. She is a businesswoman and wife of popular Alhaji Danjuma in Agege.

OVER 3 ARTISTES ON THE BANDSTAND

It will not be an overrating if more than 1 or 2 artists performed at this party because of the status of the celebrant’s husband. Many artists came on board to honour the celebrant and her husband. Majorly on the bandstand was Awesome band and he was joined by other juju artists who mesmerized the audience.

At the party were many society women whose styled got us drooling. They are from different sectors. Some are big-time fabric merchants who storm the party and some of the cliques we noticed were some society women who run big stores in Alade and Ikeja. Some of them were Radek Clothing boss, Radeke Kupoluyi, Jumoke Otitoju, Bola Bankole and many others.

LAGOS FERTILITY COUPLE, ABAYOMI AND TOLA AJAYI WERE THERE

Celebrity husband and wife, Dr Abayomi Ajayi and his pretty wife, Tola Ajayi showed up for the Peters. They enjoy a close family friendship with the Peters as they storm the party to honour the celebrant. They both looked good together.one of Sammies’ daughters, Sade is married to Tola Ajayi’s brother.

The Chairman of Revolution plus property, Bamidele Onalaja was at the party. Hardly will you notice that he is at an event except you know him or been introduced because he sits quietly and never the Owambe type but he also showed up with his close friends for the Peters..

When veteran actress, Toyin Adegbola popularly called “Asewo to re Mecca” in one of her blockbusters movies stormed the party, it was an uproar from the society women who loved to watch her and also who loved to have pictures with her. She was at the party to honour her friend, Sammie. She was well-loved at the party and also added colour to the party. Her skin at over 60 is flawless as the glow was all over the place.

At the party were some celebrity big boys who came to honour Sir Shina and Sammie Peters. The former spokesperson of President Goodluck Jonathan, Chief Reuben Abati was spotted with his wife. Other big boys were seen on different tables having cool fun. Sighted were Yemi Shodimu, Brigadier Abiodun Bolarinwa, Demola Oniru, Evang. Kayode Ajala, Chief Koseunti and others.

OVER 500 CELEB WOMEN DAZZLED IN THE GOLD ASO EBI

CELEBRANTS CHILDREN AND INLAWS STOOD BY THEIR MUM

The celebrants’ children were all supportive of their mum. They rallied round her and made sure everyone was well taken care of led by Shade, her first child, they made sure their mum had a beautiful birthday celebration.