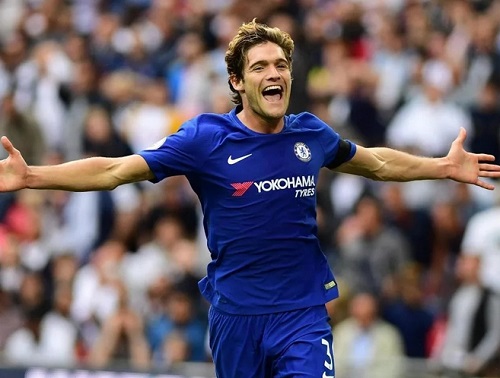 Chelsea’s Marcos Alonso will miss the FA Cup semi-final against Southampton at Wembley on Sunday after being given a three-match ban for violent conduct.

The 27-year-old Spanish defender was charged by the Football Association (FA) after a challenge on Shane Long in Saturday’s 3-2 win against the Saints.

He will also miss Premier League matches at Burnley on Thursday and Swansea on 28 April.

Marcos denied the charge and said such a suspension would be excessive.

But this was rejected after an independent commission hearing on Wednesday.

The FA took retrospective action after officials, including referee Mike Dean, failed to see the incident where Alonso appeared to stand on the back of Long’s calf in the 43rd minute of the league match at St Mary’s Stadium.

“It was a poor challenge – it should have been a red card in my view,” said Southampton manager Mark Hughes after his relegation-threatened side’s defeat.

“The disappointment was the officials didn’t see it. They were all within a 10 to 15-metre radius – one of them should have seen it.”

On Wednesday, Alonso was named in the Professional Footballers’ Association’s Premier League team of the year – the only representative from Chelsea.

In his absence against Burnley, Brazilian Emerson Palmieri – who was signed from Roma for an initial £17.5m in January – is set to make his first Premier League start.