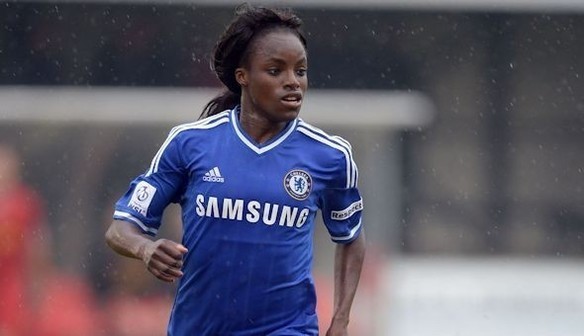 Chelsea have “commended” Eniola Aluko for “speaking of her experiences” after she accused England boss Mark Sampson of “bullying and discrimination”.
Sampson, 34, has been cleared of wrongdoing by two investigations and vehemently denies the claims made by former 30 year-old England forward.
But anti-racism group Kick It Out says the Football Association should conduct “a comprehensive independent review”.
It says claims by Aluko on Monday “throw new light on the allegations”.
Speaking to the BBC, the Chelsea Ladies striker claimed Sampson made a “racist comment” about her family in Nigeria being infected with the Ebola virus. Sampson vehemently denies saying this.
The FA said the allegation arose in informal correspondence and was not included in Aluko’s subsequent complaint, or it would have been investigated.
A Chelsea spokesman has said the club “finds any and all forms of discrimination abhorrent and it is imperative that players are supported when coming forward to speak about these issues”.
She was supported by former England team-mate Lianne Sanderson, who tweeted: “I am so proud of one of my best friends, Eni Aluko. I have stood with you through this and I will continue to do so.”
Former FA director of corporate affairs Simon Johnson tweeted: “Well done to Eni Aluko for speaking out. No-one should have to justify why they perceive a comment as racist. Sad it came to this, but brave.”