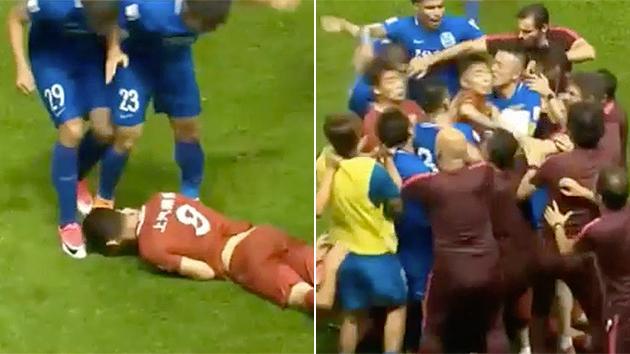 Chelsea old boy Oscar won’t be playing football in the near future.

The Chinese Super League drew attention for all the wrong reasons on Sunday when a massive fight broke out in the match between Guangzhou R&F and Shanghai SIPG.

Israeli international striker Eran Zahavi fired the hosts ahead on the half-hour mark, but Brazilian star Hulk levelled just before the break.

The match blew up in first half injury time when the sides got involved in a mass brawl.

The catalyst for the flare up was Chelsea old boy Oscar, who provoked his opponents by whacking the ball at their players twice in quick succession.

It’s been revealed on Thursday that Oscar has been slapped with an eight-match ban from the Chinese Super League.

The South American star has also been hit with a €5240, which feels like a nominal sum of money for the millionaire footballer.