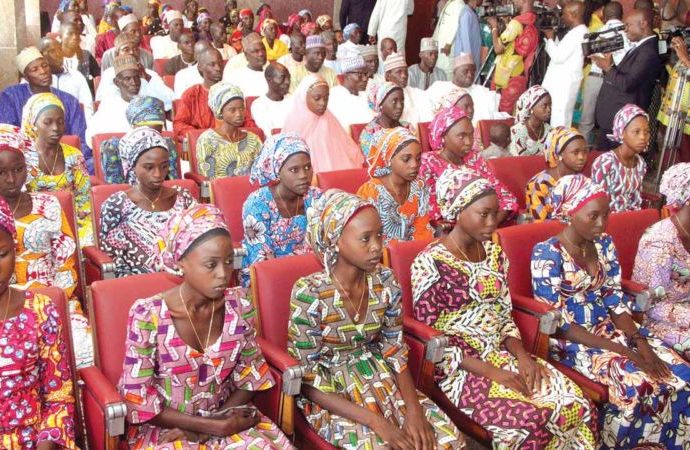 President Muhammadu Buhari on Thursday recalled that on April 14, 2014, Nigeria suffered one of the worst crimes committed against its citizens – the abduction of schoolgirls from Government Secondary School, Chibok, Borno State, by the vicious terrorist and insurgent group, Boko Haram.

In his speech on the third anniversary of the incident, Buhari said upon the inception of his administration in May 2015, Boko Haram occupied no fewer than 14 Local Government Areas in the North East of the country and posed a serious threat to other parts by unleashing fear and mayhem through the use of surprise and suicide bombing.

He said: “The menace of this terrorist group was a great challenge to the resolve of our administration to implement the Change Agenda. We, therefore, pledged to reverse the situation, which constituted a threat to the sovereignty of the country.

”We were determined to secure the release of the Chibok girls and others forcefully abducted from their homes and communities and retake the occupied territories.

“Determined to secure the freedom of the abducted girls and recover lost territories, this administration gave the necessary political and logistical backing which energised gallant members of our armed forces and other security agencies to overrun the headquarters of Boko Haram in the Sambisa Forest and scatter the terrorists from their strong base.

“Today, the group has been degraded and is no longer in a position to mount any serious, coordinated attack, other than sporadic suicide attacks on soft targets. Even at that, their reach is very much confined to a small segment of the North East where they had previously held sway unchecked.

“Nigeria and indeed the entire world, must however, recognise that terrorism has no borders and remains a growing concern which calls for collective efforts to curtail. I, therefore, call on all Nigerians and residents in the country, to remain extra vigilant and report any suspicious element or group to the security agencies. We cannot afford to let down our guards. Under my watch, no group will hold the country to ransom.

“On the Chibok girls, we have had reason to celebrate the return of twenty-four of them and thousands of other Nigerians who were forcibly abducted by the terrorists.

“As a parent, I am eternally grateful to God that some of the girls were found alive and have been reunited with their families. Government is doing all within its powers to reintegrate the freed girls to normal life. Furthermore, Government is in constant touch through negotiations, through local intelligence to secure the release of the remaining girls and other abducted persons unharmed.

“My special appreciation goes to the parents and families that have endured three years of agony and waiting for the return of their children. I feel what you feel. Your children are my children. On this solemn occasion, my appeal is that we must not lose hope on the return of our remaining schoolgirls.

“Our intelligence and security forces, who have aptly demonstrated their competence, are very much equal to the task and absolutely committed to the efforts to find and return the schoolgirls and others abducted by Boko Haram.

“I also thank Lake Chad Basin countries, friendly nations and international partners, who at various points in the last three years have offered their support for Nigeria.

“Like I have repeatedly said, the Federal Government is willing to bend over backwards to secure the release of the remaining Chibok girls. We have reached out to their captors, through local and international intermediaries, and we are ever ready to do everything within our means to ensure the safe release of ALL the girls.

“I wish to reassure the parents of the Chibok girls, all well-meaning Nigerians, organisations and the international community that as a government, we are unrelenting on the issue of the safe return of our children.”

”I trust God that soon, our collective efforts will be rewarded with the safe return of our schoolgirls to their families, friends and their communities.”