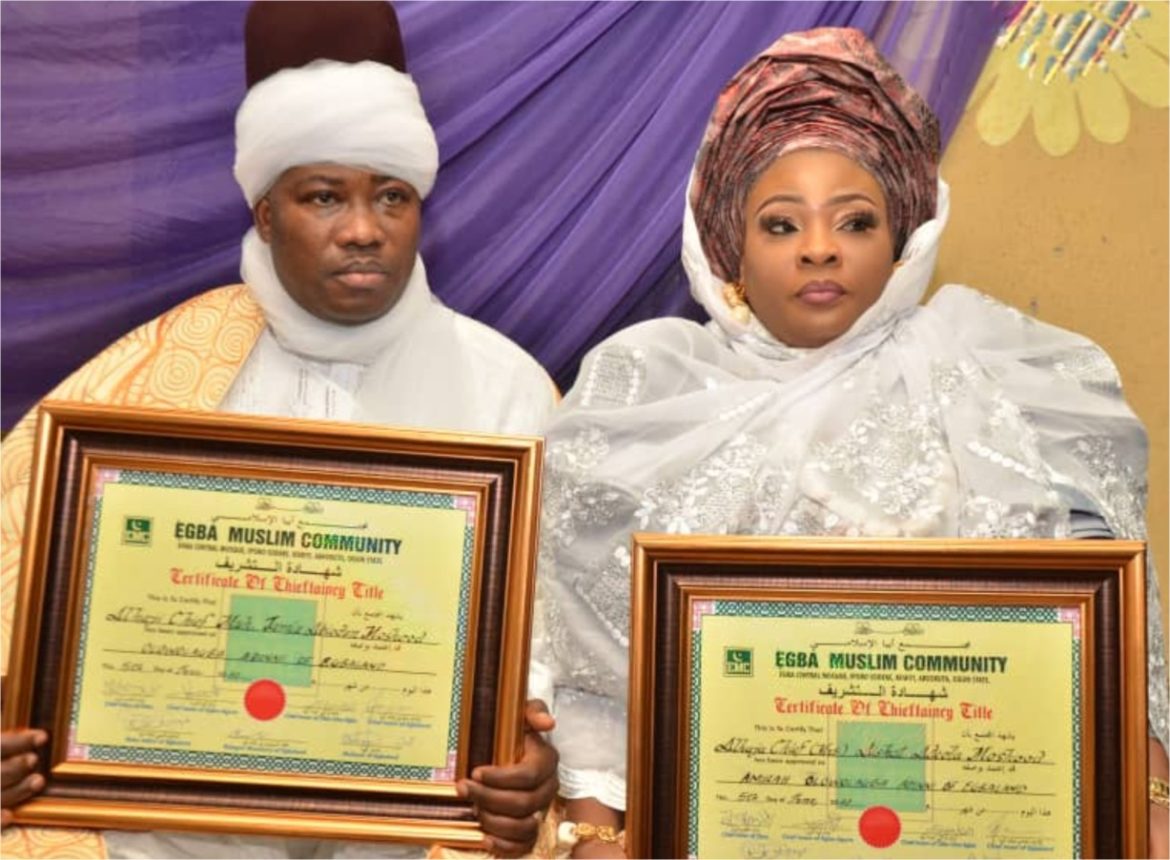 The event which was held at OOPL Event Center in Abeokuta was well attended by all the who-is-who in the society. It was a one-in-town party, as the Olowolagba and his wife literally shut down the whole city that day.

After the chieftaincy held at the mosque, the reception took place immediately after the coronation at the popular event centre, OOPL situated at Oke-Mosan, in Abeokuta. And it was a night to always remember for al the guests in attendance.

Lets tell you a bit about Chief Muhammad Jamiu Abiodun Moshood, the new Olowolagba of Egbaland. He is a successful business and one of the richest young men in Lagos. He’s the Chairman of Turaki Estate. He’s the Oluomo Adeen Ilugun Oke Ona Egba, Oluomo Adeen Mokola Oke Ona Egba, Baba Adinni Ibaragunland, Turaki Adeen Kunfayakun Worldwide. He runs a chain of businesses that has made him very popular as a business tycoon and philanthropist.

He’s a devoted and practicing Muslim who does not believe in a double standard, he said, when he was talking about himself “I’m a devoted and practicing Muslim. Not a Muslim who will pray and go to the herbalist tomorrow. I don’t believe in vision. My wife knows me, my Security people know. When you say you see a vision for me, I won’t take you seriously. I hate it. If I want to find out about things, I’d pray to God and He will show the things to me. I’m too close to God. I don’t have anything that I’m doing other than praying to God. I don’t have any source of money.

I studied abroad, I have a tourism company abroad. I’m also an European citizen to the core. I’m using a red passport. I invested over there, I have the money. My wife asked me to divert some of my cash to real estate and she is a good wife and I did and I did not regret it.

I was born and bred a Muslim at Mokola, Abeokuta. I’m the Oluomo of Ilugun. My grandmother brought me up that way. If I didn’t pray that time, I’d be flogged. So, I’m used to the system. My mum always tells me that Ola Tolorun ba see fun yan lo ma pe, (literally means only God-given wealth lasts). There is even a verse in the Quran, many that says so. That’s why you see some people, they have money today, and tomorrow it’s gone. I started making money in my 20s. In 1995 when I finished my primary school in BBHS, Baptist Boys High School, Abeokuta, and after that, I went to Nigerian Institute of Travel and Management Studies and I got a job at a travel agency at Tafawa Balewa Square after the completion of my course.

At the office, I started as a Ticketing Officer and lifted to supervisor and from that to a manager who was making millions. I knew all the customers then and I had the intention to study abroad. I bought a car at the age of 23. Even while there, I was into serious ticketing for many rich people.

On August 4, 2000, I left for abroad where I furthered my education. A friend of mine told me about some recruitment firms in Saudi Arabia recruiting medical doctors for them and he gave me the contract. I’ve been recruiting for them for the past nine yards. And the real estate has been on since 2014 in Lagos.

ABOUT THE NEW AMIRA OF EGBALAND

Beautiful Hajia Aishat Adeola Moshood, the new Amira Olowolagba of Egbaland is one of the top Lagos society women. She is a fabric merchant who is also playing big in the gold business. She also runs “Turaki Garden City” with her husband, Chief Muhammad Jamiu Abiodun, the newest Olowolagba of Egbaland. Her business, Moshade as she is fondly called too is popular in Lagos and it’s environ. She’s into 3 chains of businesses and she plays big in all of them. She runs Moshade Gold, Moshade Skincare, Moshade Fabrics. The love story of Moshade and Turaki is one that will interest you any day, anytime. She’s from a very deep Christian home with Pastors. Most of her family members are pastors in Redeemed Christian Church but love made her to convert to muslim which she never regretted till date, she is the only Alhaja in her family, and not just only Alhaja but another feather has been added to her cap, she’s now the new Amira of the whole of Egbaland, the first Amira in Egba if you care to know. Moshade will tell you any day, anytime that she found favour of God in Islam “I’ve found God’s favor in Islam. He has wiped away my tears and I found joy in Islam. I’m proud to be called a Muslim. I’ve found joy and everlasting peace. I’m so grateful to Almighty Allah and my husband. I used to tell people that all men are not the same. It is very rare to find a very prayerful and supportive man”

The venue for the entertainment of guests was at the prestigious OOPL (Obasanjo Library) behind NNPC Filling Station, Oke Mosan in Abeokuta Ogun State. It is one of the best event centers the rich always use for their event in Abeokuta, the first choice for many. It has a big parking space and many facilities to make your guests enjoy your party. Many of the vendors started their work since Thursday 3rd of June, before the other vendors joined them on Friday 4th of June. And that preparation actually reflected in the end beauty of the venue. The hall was decorated in a way that befits the Kings and Queens. The attraction starts from the entrance, the beautiful red carpet where the beautiful pictures of the new Olowolagba of Egbaland and his wife, the first Amira Olowolagba of Egbaland were on display. What about the sitting arrangement? Trust Turaki and his wife; they made sure that the sitting arrangement does not go beyond the government orders, and there were enough space between each table. Every Covid-19 rules and regulation were duly observed. It was one event that its memory will linger on for a while.

DIGNITARIES STORM MOSQUE FOR THE COUPLE

Going to the mosque on d-day for the proper coronation was an unforgettable experience. It was a total shut down. Turaki’s convoy from The Conference Hotel where the couple lodged to the Mosques was one in town. It was a royal movement and that attracted many indigenes, Lined up on the road watching. Many were even wondering what was going on when they sees two beautiful horse leading the convoy of almost 50 cars. Many dignitaries, Chiefs and notable Imams were already seated. They all turned up for Olowolagba and his wife.

2 MUSICIANS ON THE BAND STAND

Popular musician Ere Asalatu and Emperor K Blessing, one of the best musicians were on the band stand on this day. Their stages were mounted differently; Ere Asalatu’s stand was mounted at the front beside the celebrant’s seat while Emperor K Blessing’s stage was at the middle. The MC, Alawiye coordinated the two bands in such a way that they delivered and made the day a memorable one for all the guests present.

As the event planner of the day, royal profile event planner kept the venue on her high profile giving it the look the ceremony deserves. The venue was well adorned with the stunning portraits on the celebrants while the hall was decorated from top to bottom with lovely flowers and drapes. The red carpet section had the most beautiful backdrop with the rugs well laid and tables well set. This made the venue like heaven on earth.

NEW U CONCEPTS COORDINATES THE EVENT

With Biodun Adebare a.k.a New U Concepts as the coordinator of the event, we cannot but identify her tremendous efforts in putting this glamorous party together as all guests were well served and put at ease. Known as a close friend of the Amira, she was seen close sides with all vendors ensuring that no one was left unattended.

THE ROLE OF AMIRA’S FRIEND, DEBOLA

In the success story of this celebration, the activities of Debola another friend to the Amira cannot be neglected. She played a vital role alongside Newu in ensuring that all in attendant of the event are well served. She could be seen everywhere ensuring that guest were well fed and happy.

In identifying the dignitaries in this event, Oba Abdul-Fatia Akorede Akamo the Olu Itori of Itori land and his Olori made an insightful presence at the event. They had all the apparel linked with dignitaries around them as they always do when seen at events together. Their presence gave the event a glow made to be seen at event meant for royalties.

Gists From The Burial of Chief Fola...