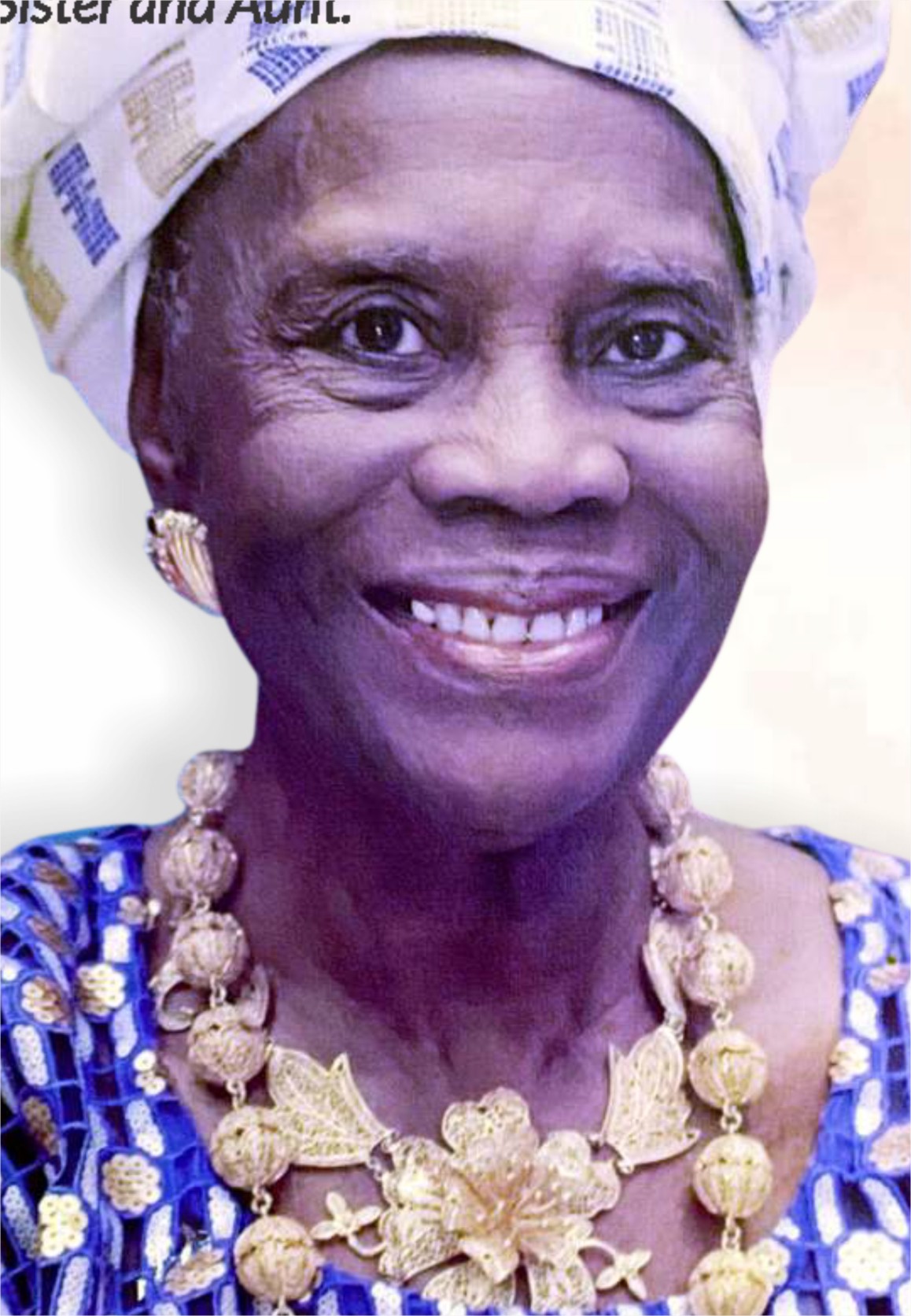 Sidipon is today best known as a community sited to the southeast of Oke Mosan (Governor’s office) in Abeokuta, becoming increasingly famous for being the location of new residential estates being built to meet the demand for housing by the rapidly growing middle class of Ogun State. In the early 20th century, it was merely a little hamlet/village where Mama’s grandmother, Aridegbe, and mother, Sekumade, lived. Sidipon was a kind of spiritual retreat where Sekumade, Mama and her only sister on her mother’s side, Chief Folake Solanke, SAN would periodically return to experience the warm loving care of Aridegbe, away from the sometimes competitive polygamous, but always loving,  home of Mama’s father, Chief Jacob Sogboyega Odulate, the Blessed Jacob, a.k.a “Alabukun”. Mama’s early life was marked by her very strong links to these two women, and no story about her would be complete without a mention of her life in this village-turned-suburb. Her earthly sojourn was moulded by the many life lessons she imbibed from these two towering matriarchs.

Mama was the first child of her mother and the second oldest of the many children of the great Alabukun. As the Bere of the family, she found herself being tasked with more household and domestic management chores than a pre-teen girl could ever expect. These early life challenges were to increase upon the death of her mother, Sekumade, when she was only 12 years old, and her sole maternal sister, Folake, a mere 2-year-old infant. Just before she succumbed to the fatal illness that took her away from the two little girls, Sekumade told Mama that she was to make it a lifelong duty to look after her infant sister, an admonition that she took to heart and abided with for the many years after they were both left to the care of their maternal grandmother. Mama’s later fame as a disciplinarian teacher and administrator can rightly be traced to those early challenges that she faced.

Mama had the good fortune to be born to a father who valued education more than most wealthy polygamous men of the day did. He encouraged the young Stella Olubukunola to start Primary School in her 7th year. Ago-Oko Primary school was followed by 4 years at Imo Methodist Senior Primary School and then Idiaba Girls School. It was at the latter institution that Mama discovered a talent for sprinting which gained her a district-wide reputation. Finally, she attended Shagamu Girls School to secure her training as a primary school teacher.

Alabukun’s approval of, and commitment to women’s education was manifested by his decision to allow Mama to follow her older brother (the late Dr. Koya Odulate) abroad to continue her studies. She secured a Bachelor of Arts Degree at the famed Durham University. This significant academic success happened at about the same time she was introduced to her future husband of 63 wonderful years, the late Justice Michael Adeyinka Odesanya. The union of two prominent families of Ikorodu land – Gbadamosi-Odesanya and Odulate – was to have immense political, financial and social ramifications for the history and development of the two regions that are today known as Lagos State and Ogun State.

The now pregnant Mama and her Oxford law graduate husband returned to Nigeria in early 1952 and set up home in the Reclamation Road mansion of Alhaji S. O. Gbadamosi (older brother of Michael Adeyinka Odesanya – popularly referred to as SOG). She became a mother in June of the same year but only after she had started teaching English and the Classics at Nigeria’s foremost girls’ secondary school, Queens College, Yaba. Mama’s sense of discipline and enterprise manifested itself as soon as she returned home to Nigeria. She took up the task of assisting SOG in the training of his already rapidly expanding family. The future successes of Mrs. Wonu Folami, Rasheed Gbadamosi, Gbemi Tejuoso – to mention just a few – can be traced to the rigid application of her teaching skills to help bring up her nieces and nephews. Many of these children would in their later years recall how a heavily pregnant Mama would climb down from the 3rd-floor apartment she shared with her darling “Mike”, with her books and files tucked under her arm, enter her black Hillman saloon car and proceed to drive herself from SOG’s mansion across the Carter Bridge, all the way to Yaba, on the Lagos Mainland, where Queens College was located.

An eventful and extremely successful teaching career at Queens College was to end in 1963 when she was posted to work in the Federal Ministry of Education in the Tafawa Balewa Square area of Lagos Island. Working in a team of young and ambitious public servants including the likes of Mr. S. Cookey, M.O.K. Williams, Chief Folarin Coker, Alhaji Durosinmi-Etti, Professor Yesufu and Mr. Yomi Phillips, Mama was picked to join in the establishment of the first nationwide Manpower Development program for the country. This involved substantial international travel and several months away from her husband and young children. And yet, she was able to successfully balance the demands of a very challenging job with the equally important task of raising her children. In spite of the loss of two infant sons due to malaria and smallpox vaccination reactions, her ambition to be the best she could never waver.

Like her father, she placed the education of her children (and of course of her many students at college) at the top of her life priorities. All of her children made her proud with their various academic successes both here in Nigeria as well as in the UK and in Canada. She was also most supportive of her husband’s legal career and when he appeared for the defence in two landmark cases of the early 1960s (the Awolowo Treasonable Felony and Wole Soyinka WNBC cases) Mama would sometimes sit in her husband’s home study to keep him company as he slaved away all night preparing for the next day’s arduous court appearances.

Mama was recruited to be among the pioneer staff of the newly formed Lagos State Ministry of Education. There is no gainsaying the fact that much of the well-deserved reputation that Lagos State now has as the most educationally accomplished State in the nation was developed and nurtured by the tirelessly innovative work of Mama and her team at the State’s Ministry of Education, particularly in the 1960s and 1970s. Even when she was transferred to become Permanent Secretary in the Ministry of Trade and Industry, she quickly adapted to the new challenges of a particularly important area of the development of Lagos State. It was no surprise that when she retired in 1984, Mama was immediately recalled to public service by the government of Lateef K. Jakande and in key positions as Chairman of Eko Hotel, Member of the Civil Service Commission and others.

Mama’s 4 children (Dapo, Yetunde, Bimbo and Yomi) are immensely proud of their mother’s wonderfully accomplished and fulfilled life. She was grandmother to 12 and great grandmother to 8, every one of whom loved her with enduring and passionate affection. She is also survived by her only maternal sister, Chief Folake Solanke, SAN and her 3 additional Sekumade-descended grandchildren and 1 great-grandchild. Mama was passionate about music and every opportunity to attend social functions with her husband and friends was never to be missed. She also loved travelling, making an annual Summer’s trip to her favourite city, London. She was honoured with three senior honorary chieftaincy titles, namely:

•Yemoo Okin of Ife, •Muwagun of Ikorodu, •Yeye Oba of Imota, It is impossible to put into mere words just how much this magnificently accomplished and loving woman will be missed.