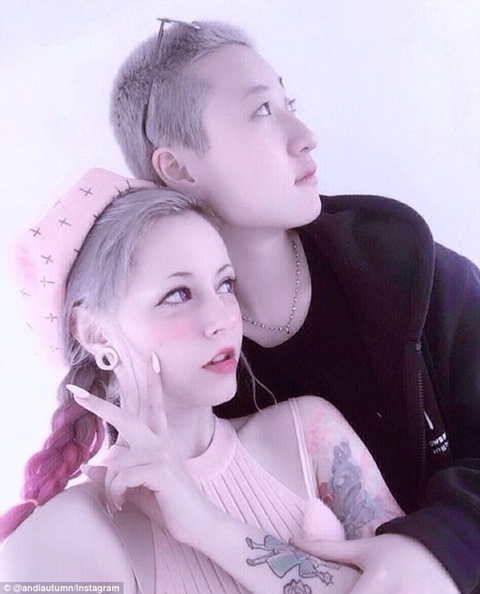 Etta Ng, 17-year-old daughter of Hollywood and Chinese movie legend, Jackie Chan, has come out publicly as a lesbian after she announced the news on Instagram by posting a picture of herself in front of a rainbow background, and later confirmed she is in a relationship with 30-year-old social media influencer, Andi Autumn.
According to a report by Dailymail, Etta who posted an emoji of a rainbow alongside the following hashtags: ‘#lgbtqai #lgbt #lesbian #androgynous’, admitted she was ‘speechless’ at how much support she has received after growing up with a lot of ‘negativity and close mindedness’ throughout her life.
She wrote: ‘I am in awe at the amount of support and love poured my way. I am speechless at how followers went to my Girlfriend @andiautumn and my account to show us both so much positivity. People all over the world have been rooting us on as Hong Kong media continues to mock. I’ve grown up in a world of negativity and close mindedness but I am at that point where I realise that I can use my experience to tell my truths and help others just like me. Thankfully I’ve grown since the days I was powerless and uncertain what the world has for me. Thank you for the enormous outpour of love and acceptance.’
Meanwhile, Andi publicly declared her love for Etta and claimed the pair have suffered ‘discrimination’ from their family and friends about their relationship. She wrote: ‘I’ve never met anyone like @stolenmilktea . She has given me a chance to fully express the running thoughts in my head. No judgements, just understanding.
‘Everything was against us. We’ve been pushed down again and again but its worth it knowing we will get through it together, side by side. skip past all of the difficulties we’ve had this year, we are finally heading in the right direction, we have a path. We’ve encountered a lot of discrimination from family, friends, and the Hong Kong society.
‘We are living in such an international city and yet so many people have their minds closed off. But none of it matters when I know every morning your going to be next to me. I love you.’
Chinese Movie Legend, Jackie Chan’s Daughter Comes Out as a Lesbian was last modified: October 11th, 2017 by Arinze Ago