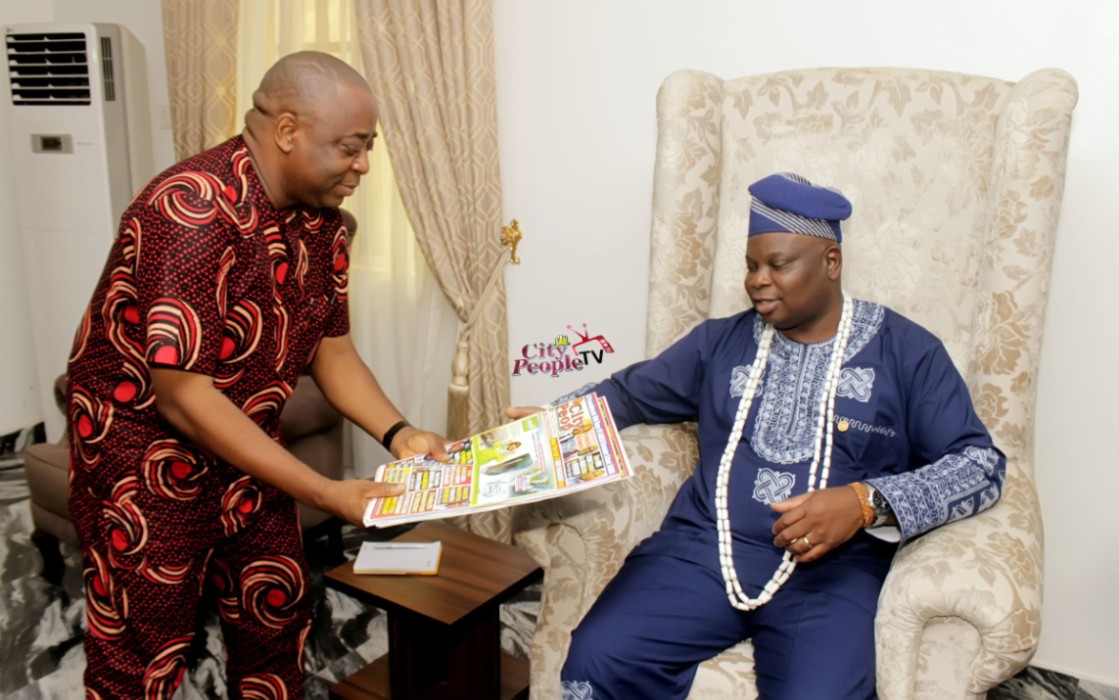 •The Story Of An Oba Who Is A Professor

In the next few days, His Royal Majesty, Oba Professor Adeyemi Abdulkabir Obalanlege, the Olota of Ota, Awori Kingdom will be 55. This is also his 3rd year on the throne.

City People Publisher, Seye Kehinde, then decided to visit Kabiyeesi to pay homage to this accomplished royal father. We were stunned by the sheer beauty of his new palace, which sits, side by side with the old palace building.

The entire palace has been transformed. There are many other things he has done. Oba Adeyemi Abdukabir Obalanlege is the 14th Olota of Otta. He is a liberal-minded intellectual, a cerebral personage in the comity of knowledge and a researcher of profound pedigree. Professor Obalanlege waded through the drudgery of academia as a lecturer, becoming a full Professor of Mass Communication after publishing in a lot of academic journals, presenting papers across several continents and supervising these and dissertations that earned him a deserved reputation as a world-class scholar.

He was not your typical run-of-the-mill university teacher. He earned the honour by dint of hard work, diligence and espousing theoretical analogies that many dread to venture into. Oba Adeyemi didn’t just become a university teacher or professor. He is total Journalism personified. From the humble beginning as a Reporter with the defunct The Mail Newspaper (1989 and 1990), where fortuitous circumstances made him meet Prof Idowu Sobowale, one of his mentors as an academic/professional journalist. He moved in 1990 to 1993 with the veteran Sobowale to The Republic, where he understudied how the latter was combining Teaching of UNILAG with his job as Managing Director of the paper.

He quickly learnt the ropes on Investigative Reporting, Sub-editing to news writing and excelled. Even his stint as Public Relations Officer at the Lagos State Polytechnic between 1993 and 1995 did not diminish his penchant for the journalese. He soon moved to Thisday Newspaper.

Tourism & Hospitality desk with Marketing and Advertising that earned huge revenue and respect for the news medium. It was from ThisDay as Tourism Editor that he travelled to the United Kingdom to hone his skills and academic laurels, culminating in his lectureship at two leading British Universities: the University of East London and Lincoln University – a Teaching, Excellence Framework University in Northern England.

Back home in Nigeria, Oba Adeyemi Obalanlege taught at his alma mater, Ogun State Polytechnic, the Lagos State University and lately, Crescent University in Abeokuta, where he was Sub-Dean at the Postgraduate School and University orator at the last Convocation ceremony.

A prodigious researcher and focussed academic, he was promoted Professor in February 2018 on account of his publications and contributions to the body of knowledge. This came as Otta was still savouring the joy of Obalanlege’s emergence as the first Awori Oba with a PhD.

He attended early schools at Mushin and Ansar-Ud-deen College, Isolo and sold bottled drinks on Aswani Market for his late teacher-mum, before berthing at Iganmode Grammar School, Otta. He earned an HND in Mass Communication from Ogun State Polytechnic in 1991; got a Bachelor of Arts (Hons.) in Journalism from Independent Colleges, UK; did a Postgraduate Diploma course in Food Safety and Quality Management at Greenwich University in London; attended the University of Leicester for his Master’s in Mass Communication and bagged a PhD (Communication Studies) on scholarship at the University of Antwerp in Belgium.

While in England, he also became a Media entrepreneur. He shuttled between Nigeria and the UK to produce his Tourism, food hospitality compendium called Food International Magazine, which he rested to pursue his doctoral programme. He was the Editor/Publisher of City Vanguard newspaper, Ireland and ran the newspaper for 12 years between 1996 and 2008.

Obalanlege joined the academia as a lecturer on October 1st, 2008 and rose to the position of Senior Lecturer on September 1st, 2014. He is a Fellow of Higher Education Academy (HEA). United Kingdom; Member Chartered Institute of Public Relations (ClPR). London; Member, Public Relations Institute of Ireland (PRII). Dublin; Member, Nigeria Union of Journalists (NUJ). Ogun State, Nigeria; Member, International Association for Media and Communication Research (lAMCR). After meeting the stipulated criteria, Obalanlege was registered into the membership of the Advertising Practitioners Council of Nigeria in September 1995.

A redoubtable Rotarian and past president of Rotaract Club of Isolo, Obalanlege is a member of Rotary Club of Otta Metropolitan and has earned International Epaulets in the Paul Harris founded charity organisation. An ardent listener of Sakara music as rendered by Oseni Ejire and Kamoru Dada, his hobbies include Football and Table Tennis playing. A widely travelled and distinguished communication professional, Yemi Obalanlege has visited virtually all continents of the world.

Prof Obalanlege, (Lanlege Ekun II), Arole Iganmode emerged the preferred candidate out of the 22 Princes presented by the Ijemollsoloshi Ruling House to all the 5 Living kingmakers on November 28, 2017, and was crowned traditionally by the Odota of Otta, High Chief Oladele Adenji on February 28, 2018.

Olota is happily married to his heartthrob of several years. Kabiyesi’s pleasant and delectable wife is Toyin Obalanlege (nee Gbobaniyi). She is a Senior Manager with a US-based pharmaceutical company, Abbott Laboratories, accommodating, loyal, friendly and selfless.

READ ALSO: WHY MANY LAGOS CELEBS WANT MC OLUOMO AT THEIR PARTIES

Why Many LAGOS Celebs Want MC OLUOMO At Their Parties