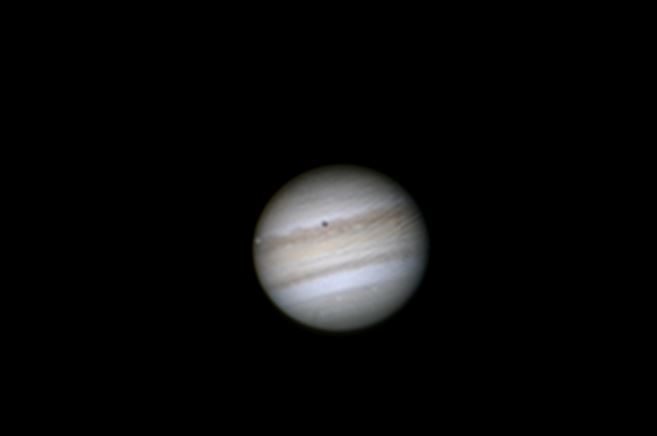 City People’s technology reporter, Kelechi Okorie, who is one of Africa’s most ardent citizen astronomers and an astrophotographer has captured planet Jupiter and the shadow of its closest moon, Io as it sweeps across the giant gas planet.

The phenomenon is akin to the solar eclipse here on earth whereby the shadow of our moon sweeps across our planet as it obscures the light from the sun in what is technically happen at the same time as a transit of a body across another on the celestial sphere. Io and the other three closest moons to Jupiter periodically cast shadows on the planet, sometimes three of them at the same time.

The image was captured from Latitude 6.6036 degrees in Lagos Nigeria and despite what is called a poor seeing condition in astronomy and a high cirrus cloud preventing better resolution, the image was captured using, a ZWO cloned planetary/guiding CMOS  camera and a 127mm maksutov-cassegrain telescope, aided by a 2x Barlow lens.

Also, despite the limitations of the field rotation of the Altitude/Azimuth mount used, the resolution was enough to clearly see the shadow of Io and make out some of the details of the giant gas planet, including the cloud bands made up of ammonia. The position of the rotation of Jupiter during the capture was such that the Great Red Spot of Jupiter was turned away from the view of the earth. Jupiter makes one complete rotation around its axis at an average of every 9.8 hours as against 24 hours on earth.

Io is the closest moon to Jupiter  at an average of 421,700 km away and completes an orbit around Jupiter every 42 hours while our own moon  completes an orbit at approximately 28 days. However, Io is roughly the same size with our moon . It is one of what is called the four Galilean moons which were discovered by Galileo when he looked up at the heavens with a telescope and observed Jupiter and the moons in the year 1610. He first started observing Jupiter in 1609 but discovered the moons the following January. The other Galilean moons in order of their proximity to Jupiter are  Europa, Ganymede and Callisto.