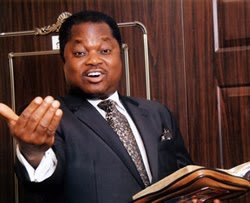 Thursday 4th, May 2017 was a day of celebration for the centre Pastor in charge of CLAM PRAYER CENTRE LEKKI Pastor Tunde Kolade and the worshippers as the centre clock one year of existence in Lekki.
The Anniversary started at exactly 7:00am with intercessory prayer by one of the church ministers, Min. Theopilus Lawrence. Praise & worship session followed immediately at about 7:12am by the Glorious choir of the ministry. Min. Segun Oluwayomi a.k.a Omo Arugbo Ojo was also present to do what he knows best for about 10mins before the centre Pastor; Pastor Tunde Kolade mounted the pulpit. In his speech, Pastor Tunde appreciates God for His faithfulness over CLAM PRAYER CENTRE LEKKI that was inaugurated last year by the founder and the Senior Pastor, Pastor Wole Oladiyun and shared some of the testimonies the Lord has given them ever since the prayer centre started.
He acknowledged Pastor Wole Oladiyun as a father who the grace of God upon his life is compelling and the grace speaks with mighty testimonies. According to him, marking one year anniversary it’s a showcase of God’s faithfulness to CLAM, he also talks about how God gave Pastor Wole Oladiyun the vision of CLAM prayer centres about 19years ago, that it was birthed a year shows the covenant keeping attributes of God.
The General overseer/Senior Pastor of the ministry (CLAM) Pastor Wole Oladiyun was available on this glorious day with his amiable life the director of family life/Pastorate of CLAM, Pastor (Mrs.) Bukola Oladiyun, they came in around 7:20am in company of his P.A Pastor Tunde Dada and mummy’s P.A. Sis favor, with their protocol officers.
At about 8:40am Pastor Wole Oladiyun mounted the Pulpit. In his speech, he gives all the glory to God who started the centre exactly a year ago and backed up his work with testimonies, miracle & signs and wonders in the centre. he appreciated his wife for her endless supports and prayers, he recognized the presence of the board of Directors of CLAM present, then he blessed God in the life of the centre Pastor, Pastor Tunde Kolade who he refers to as a faithful Timothy, he appreciated them and prayed for them. Then he appreciated all the members of CLAM PRAYER CENTRE LEKKI for supporting the vision. Then he engaged them in prayer that lasted for about 1hrs 30mins and followed by the thanksgiving proper before the cutting of the anniversary cake and Pastor (Mrs.) Bukola Oladiyun ended the service with prophetic prayers and benediction.
You will remember that CLAM prayer centre was inaugurated by Pastor Wole Oladiyun last year as one of the centres of the fastest growing church CLAM; also CLAM PRAYER CENTRE ABUJA and CLAM PRAYER ACADEMY UK are doing well to the glory of God.
CLAM PRAYER CENTRE LEKKI holds weekly deliverance school, Tuesday to Friday 7-10am. Thursday revival hour also 7-10am and plan is in top gear to commence their Sunday glorious service.