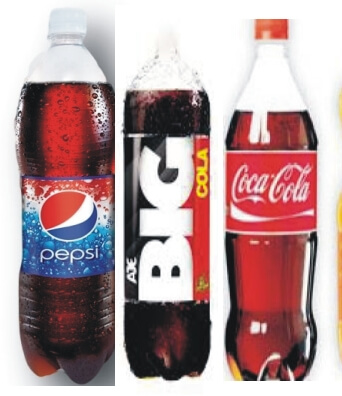 A recent market survey revealed that many people believe that Coca-Cola is losing its market strength to other brands of soft drinks, because it refused to play the more for less game. But a deeper research carried out by City People’s Brands & Products revealed otherwise. Which brand plays biggest in the soft drink market? This question and more are answered in the next few lines below.

The question about which brand leads the pack in the soft drinks market where 3 major players, Coca-Cola from the stable of the Nigerian Bottling Company, NBC, Pepsi from the 7up stable and Big Cola, from a table of multinational beverage company, AJE Group, has been very difficult to answer because of several factors not very obvious to observers and analysts. However, the thought that Coca-cola has had its glory days behind it after slightly jacking up the price of its products with the introduction of Solo and Bigger Boy for different categories of consumers is common among lovers of the coa-cola brand.

HEALTHY COMPETITION GIVES BIRTH TO FRESH IDEAS
Pepsi did not go to sleep after Big Cola craftily entered the market with same price for increased bottle size. The step gave room for more competition , a bait that invariably attracted patronage, because ‘consumers want more for less’, a well thought- out strategic plan one would say, which paid off for the product.

It introduced a campaign, which began with the popular Twitter campaign #ThingsILong-ThroatForWell, that snowballed into a new 60cl Pepsi bottle a.k.a The Long Throat Bottle. Of course #ThingsILongThroatForWell campaign ignited a huge buzz on Twitter, trending all the way. But that is not all. The new 60cl Pepsi bottle is 20 percent bigger than the previous Pepsi bottle, but still retailed at the same price. The larger content for the same price also applied to Mirinda, 7UP and Teem.

To think that Coca-cola was able to cope with all the pressure from its competitors that have reduced prices of their products is something worth praising the company for.

BIG COLA DEVISES A UNIQUE STRATEGY
AJE group, makers of Big Cola produces its plastic bottles, which provides a lowcost alternative to glass returnable bottles and has helped the brand to compete reasonably well with bigger names like Pepsi and Coca-Cola,” analyst in Venture Africa wrote.

In spite of that, AJE Group is not ready to match the big brands in terms of advertising and marketing spending but what is crucial is slow-but steady market penetration.

In one of his interviews, the Country Manager, Mr. Theo Williams, said that they would not do much on advertising. He added that the company will use more of direct personal selling and pricing strategy, a move which is seen by analysts as a likely goal-achieving marketing strategy.

“Coke spends much on advertising in Nigeria, while AJE typically avoids spending. Based on experience in other countries, their competitors offer promotional prices and increase spending on advertising.

COCA-COLA SILENTLY DECLARES LANDSLIDE VICTORY
To say that Coca-Cola boasts of master stretigists is not an understatement. After many people had thought that the company was done for and that it would be in crisis very soon, it turned the table against such speculators by recording a whooping additional 29% profit before tax. The implication is that it had more sales from every product, made more money and has beaten other competitors when it does not even appear to be doing so. How has the company managed to fare without price reduction and additional quantity?

Coca-cola recently held a conference entitled: ‘Dem Play, We Win’ for its staffers at the Eko hotel and Suites where it talked about its successes in the last one year and one of the high points of the achievement was the fact that it has twenty-nine percent more profit compared to what it garnered in the previous financial year.

CHANGE IN STRATEGY
Brands & Products gathered that one of the Coca-Cola’s secrets of success was a change in the company’s distribution chain. Coca-cola, before now followed a normal manufacturer-whole saler-retailer-consumer distribution line, but that had change to a Route-to-the-market RTM distribution chain, which means product comes from NBC directly to dealers, who cover major areas known as Managed Distributor Partners, MDPs. These MDPs invest their money in products and with the help of merchandisers to facilitate new Coca-cola outlets across the country and they MDPs stand to make profits or losses as the case may be. They are invariably an integral part of the distribution chain.

Promo Communication is another strategy that has worked effectively for the NBC. Instead of price reduction and quantity increase, the NBC decided to invest in promotions and strategically communicating such promotions to its target publics who are not actually consumers, but investors. These investors push sales and this has paid off well for both parties.
The NBC has invested so much on human capital at different levels, providing jobs for Nigerians and making profits. The route to the market is really working, more engaging because it introduces pre-sellers into the distribution chain and has generated a huge sum for NBC, Brands & Products research can reveal.

NBC opened marketing floor for different levels of dealers to help in capturing target markets at different levels. Some of these dealers are known as Manage Proximity Dealers, MPD, who are the NBC open market operators. Another level of distribution is the One Way Park, OWP, these are the sellers you see in traffic and road sides. They sell only contents in Plastic, but they also help in effective product distribution.

MARKET ANALYSIS
Further indepth findings had revealed that in comparing all three brands, Pepsi and Bigi are relatively cheaper, but in terms of profit margin, Coca-Cola brings in more money to the retailer.

Pepsi and Big Cola concentrate more on turn over (volume). However, volume is not the only revenue determinant factors. Coca-cola considers both volume, price and other factors that boost revenue.

Among all the fast moving consumer goods FMCGS, Coca-Cola has the highest number of chillers (coolers and refrigerators), which aids the sales of NBC products across the country. Coca-Cola sales representatives (pre-sellers) capture every area, region and route, which results in more marketing and invariably more sales of its products, hence, more returns.
–Damilare Salami