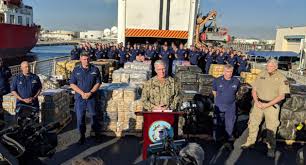 The U.S. Coast Guard announced a major drug bust after they seized close to 35,000 pounds of cocaine from suspected drug smuggling vessels in Eastern Pacific Ocean.

The drugs, worth an estimated wholesale value of $466 million, were intercepted off the coasts of Mexico, and Central and South America and off-loaded in Port Everglades, Florida on Tuesday, the Coast Guard said in a news release.

In the statement, it was revealed that the U.S. Coast Guard offloaded approximately 34,780 pounds of cocaine.

Six different crews seized the drugs from 21 separate vessels stopped in Pacific waters. The haul was the “result of the collaboration and coordination of multiple Coast Guard and interagency assets to address the complex maritime challenge of transnational criminal organizations,” Cmdr. Michael Sharp said.

Most of the drugs originate in Colombia and are destined for the U.S., according to Schultz.

See the Brave Couple Who Soaked Themselves...