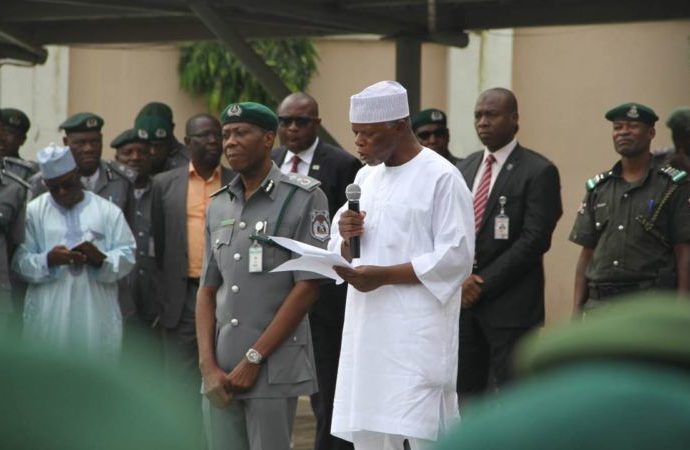 The Comptroller General of Customs (CGC), Col. Hameed Ibrahim Ali (Rtd), has yet done another major shakeup as he decorated five Deputy Comptrollers-General (DCG), and eight Assistant Comptrollers-General (ACG) in Abuja yesterday.
The promoted officers have been in acting capacity since May 2017. The five DCGs join DCG Umar Iya Abubakar who was moved in May from Tariff and Trade to head Finance Administration and Technical Services (FATS).
Col. Ali while decorating the 13 officers charged them to heighten anti-smuggling operations and significantly reduce it in the next three months. He noted that the Service has made progress in revenue collection, but that it was not doing enough to reduce smuggling activities.
“We are making progress with regards to revenue generation, but I must say we are not doing very well in curbing smuggling. I enjoin all of you to join hands with the leadership and management of NCS to ensure that in the next three months, that we have reduced smuggling to the barest minimum,” Ali charged the officers.
He said with the new team which he personally selected, he was hopeful that, “We will be able to move forward and reduce the menace of smuggling, most importantly rice, because I keep getting this information every day that rice is coming into the country. It is our job to protect our agricultural policy and that our farmers benefit from it.
“This is the first time that I would take responsibility for thorough selection of members of the management. What it means is that the failure of this management will be the failure of Col. Hameed Ali, and I hope and pray that you will not let me down,” he noted.
The new management members of the Service are; DCG Aminu Dangaladima, Enforcement, Investigation and Inspection (EI & I); DCG Sule Robert Alu, Tariff and Trade (T&T); Mrs Olubiyi Ronke, DCG Human Resource Development (HRD); Mrs Iferi Patience, DCG Strategic Research and Policy (SR&P), and Augustine Chidi DCG Excise, FTZ and Industry Incentives (EX. FTZ & I.I).
The new DCGs replace Idris Suleiman, Dan Ugo, Grace Adeyemo, Austin Warikoru and Paul Ukaigwe whose promotions were on November 2, 2015, a few month after Col. Ali assumed office.
The new ACGs however include Ladan Hamza, Mrs Ekekezie Kaycee, Mahmud Haruna, ACG Talatu Mairo Isa, and Benjamin Abeh. The others are ACG Fatade Aderinle; Mrs Enwereuzor Francies, and Aminu Dahiru.
Speaking for the decorated officers, DCG Ronke Olubiyi lauded President Muhammadu Buhari for his pragmatic leadership and the appointment of Col. Ali. “With the kind of leadership we have in the customs today, it is a must for all of us to serve,” she said.
Meanwhile Col. Ali has approved the redeployment of newly decorated ACG Aminu Dahiru from Zone ‘B’, Kaduna to Zone ‘A’ Lagos as the Zonal Coordinator while the Customs Area Controller of Oyo/Osun Command, Comptroller Udo-Aka Emmanuel is now acting ACG to coordinate Zone ‘B’, Kaduna.
Heading the Oyo/Osun Command is Comptroller David Chikan from the Defence College while Comptroller Elton Edorhe moves from Human Resource Development to head Plateau/Benue/Nasarawa Command.
Comptroller General of Customs Decorates 5 DCGs and 8 ACGs… See Full List was last modified: October 4th, 2017 by Arinze Ago

N36 Million Snake-Swallowing Report: It Was A...