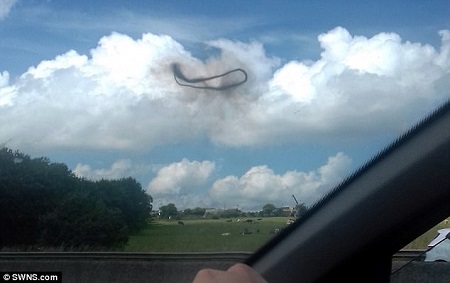 Nick Pope, who used to investigate UFOs and other mysteries for the Ministry of Defence, also debunked the phenomenon.
He said: ‘Despite exotic theories about UFOs, aliens, or portals to other dimensions, I believe there’s a decidedly down-to-earth explanation here.
‘A so-called smoke vortex can arise when you have a blast through a circular structure like a smokestack.
‘So these weird effects can be caused by accident – or indeed by design.
‘I realise that by debunking this I’ll probably be accused of working for the Illuminati or something, but I genuinely think we can close the case file on this one.’
The Met Office said that the ring did not appear to be weather-related.
While there appears to be a simple explanation, Miss Robinson was baffled by the ring.
She described the circle as ‘the weirdest thing I have ever seen’.
She said: ‘Me and my boyfriend were driving today and noticed a black flying ring in the sky. It looked a bit smokey but the shape was a solid ring.’
A spokesperson for the Met Office said: ‘We have had a look at it and cannot think of anything metrological that would have caused such a phenomenon.
‘It looks reasonably clear, with fair-weather cloud that looks like it has bubbled up. There is a little bit of rising air in the atmosphere’, he said.
‘It does not appear to be anything at ground level that is causing the smoke to rise.
‘It looks as if it’s a small feature rather than something several miles across.’
On 27 April 2016 a video showed the bizarre cloud-like phenomena hovering above the Magic Castle at the popular theme park in California.
Baffled visitors watched it float by, yelling: ‘What is that?’ while a conspiracy theorist said it would cause families to worry of an alien invasion.
In the footage witnesses were heard exclaiming in shock as the mysterious ring floated above them.
The film maker, Kyle Hawkins, said: ‘No idea what this could be… Walking up main Street at Disneyland, following the parade.
‘It was a windy night, couldn’t have been a smoke ring.
‘Everyone watched it in fear/confusion. I half expected an alien portal to open up through this ring as we were gazing up in disbelief…The strangest thing I’ve ever seen.
‘I yanked my phone out to record as soon as I saw this thing, then immediately uploaded to YouTube. This is raw footage, apologise for shakiness.’
In 2015 eerie footage emerged of a 100 metre-wide (320 feet-wide) black ring of smoke floating over clear skies in Kazakhstan.
It was seen 40 miles north of the capital Astana and hovered in the sky for 15 minutes before suddenly vanishing without trace.
In 2014 one was spotted above Warwick and stayed in the sky for three minutes. It was believed to be smoke from the pyrotechnics used at Warwick castle.
***
Via Daily Mail UK
Confusion, Panic as Mysterious Black Rings Appear in the Sky Around the World was last modified: July 14th, 2017 by Arinze Ago