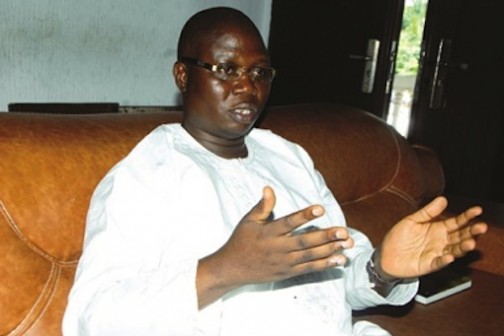 The National Leader of the All Progressives Congress (APC), Bola Ahmed Tinubu in a congratulatory message issued in Lagos, stated that the leader of the Yoruba liberation movement, Odua Peoples’ Congress, OPC, Gani Adams deserved the appointment as the 15th Aare Ona Kakanfo of Yorubaland.
Asiwaju added that Adams had never left anyone in doubt over his resolve to fight for the interest of Yoruba race.

I congratulate you on your appointment as the next Aare Ona Kakanfo of Yorubaland. With this, you have joined the elite rank of generalissimos in Yorubaland. “ You deserve this honour. You have a heart of steel. You have never left anyone in doubt about your resolve and readiness to fight for and defend the interest of Yoruba race.

In Yorubaland, particularly in the old Oyo Empire, the position of Aare Ona Kakanfo has always been a significant one. Tinubu said that as the 15th Aare Ona Kakanfo and going through the list of those who had occupied the position, Adams “come with an extra youth, vigour and vitality, which would be an added advantage’’. “ I rejoice with you and wish you well as you assume this leadership mantle and forge ahead in the service of our people,’’ he said. Tinubu, a former Governor of Lagos also commended the Alaafin of Oyo, Oba Lamidi Adeyemi for the appointment of Adams as the Aare Ona Kakanfo.

“I congratulate you Kabiyesi, Iku Baba Yeye, over the appointment of Otunba Gani Adams as the 15th Aare Ona Kakanfo of Yorubaland “You have accomplished another important task. You have broken the 19 years hiatus in picking another nominee for this prestigious title. “Otunba Gani Adams’ appointment comes after the demise of the last occupant of the office, Chief MKO Abiola, the acclaimed winner of the June 12 election, who died in incarceration in 1998.

I commend you Kabiyesi for the thorough search which produced the Oodua People’s Congress Leader as the next occupant. “While wishing you renewed strength, good health and continued successful reign, I also wish the new Aare Ona kakanfo a glorious tenure,’’ he said. The Alaafin of Oyo, Oba Lamidi Adeyemi, confirmed the choice of Adams for the title on Sunday during his 79th birthday celebration . Aare Ona Kakanfo in the pre-colonial Yoruba history was a supreme military title conferred by the Alaafin of Oyo. 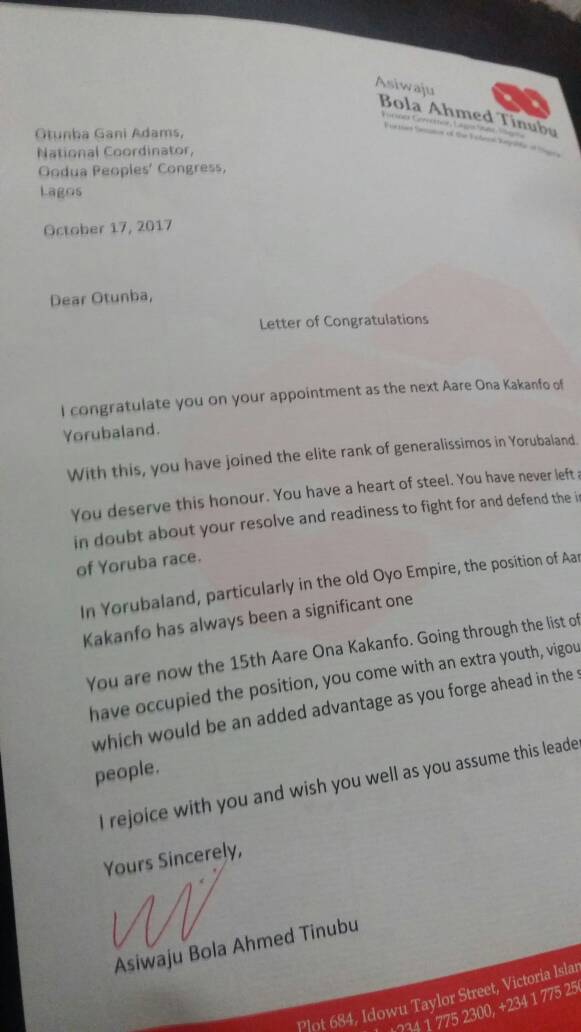 ‘Congratulations on your appointment as the next Aare Ona Kakanfo’ – Asiwaju writes Gani Adams was last modified: October 20th, 2017 by Reporter