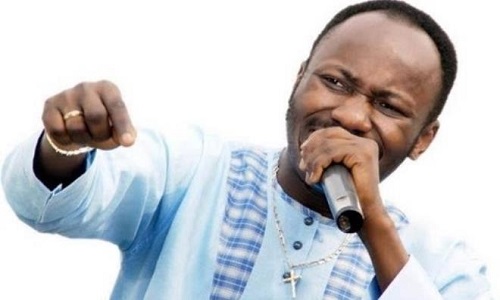 Benson Otobo, The father of Canada-based Nigerian, Stephanie has debunked any claims that Apostle Johnson Suleman, the general overseer of the Omega Fire Ministries, went to his house for introduction as her suitor.
Mr. Otobo also revealed that the controversy between his daughter and Mr. Suleman came to him as “a huge shock,” adding that he knew nothing about the entire scenario.
Mr. Otobo spoke at a joint telephone interview with PREMIUM TIMES and other journalists in Abuja facilitated by Mr. Suleman. He said he was speaking from Warri, Delta State.
Mr. Otobo said there was no formal introduction of the cleric to him by his daughter.
“Not at all; Suleman does not even know where I live,” he said.
Mr. Otobo also gave an indication that all was not well between him and his daughter.
“I don’t know how this happened, I was shocked to hear the news. Right now as I speak, we are at loggerheads because I saw her picture on the internet via whatsapp, and the way she was dressed, and I saw her tattoos and all that; I cautioned her. Then two whatsap messages that she sent to me, she was telling me all sorts of things, she said I am not her father anymore.
“So for a girl telling her father things like that, then I don’t know how you can expect me to be involved in something that concerns her.”
Mr. Otobo also said he had been separated from his daughter’s mother for almost 30 years.
“I have divorced her mother almost 30 years now. She grew up with the mother; she was very small when I divorced her mother. What happened is a case of like mother like daughter”, said Mr. Otobo.
When new men sought further clarification from Ms. Otobo, she said her earlier statement through her lawyer, Festus Keyamo, that Mr. Suleman took drinks to her family to conduct a formal introduction was inaccurate.
Asked to give the details of the said introduction, Ms. Otobo said it happened at the pastor’s office in the church’s premises at Auchi, Edo state.
“Not at our house; he invited me and my mother to Auchi, because he does all night every last Friday of the month at Auchi. We went there, me my mother, my siblings. After the service, nobody sees him, but we went there to see him and he gave us N50, 000. So that made me think everything was real.
She also corroborated her father’s explanation regarding the divorce.
“My father and mother are divorced. I actually grew up knowing that they were separated,” she said.
She however said her father was aware of her ‘relationship’ with the cleric and that he had prayed for her when she told him about Mr. Suleman’s alleged blackmail.
Ms. Otobo also said her father was angry that the media published information about her personal life alleging that he had taken money from the pastor.
The woman had alleged that Mr. Suleman promised her marriage, but abandoned her, after she got pregnant.
The pastor has since denied the allegation, adding that he had never met with Ms. Otobo.

Controversy Between Apostle Johnson Suleman And My Daughter Is A Big Shock To Me – Benson Otobo was last modified: March 7th, 2017 by Damilare Salami

Young schoolgirl crushed to death by a truck in Anambra [GRAPHIC]