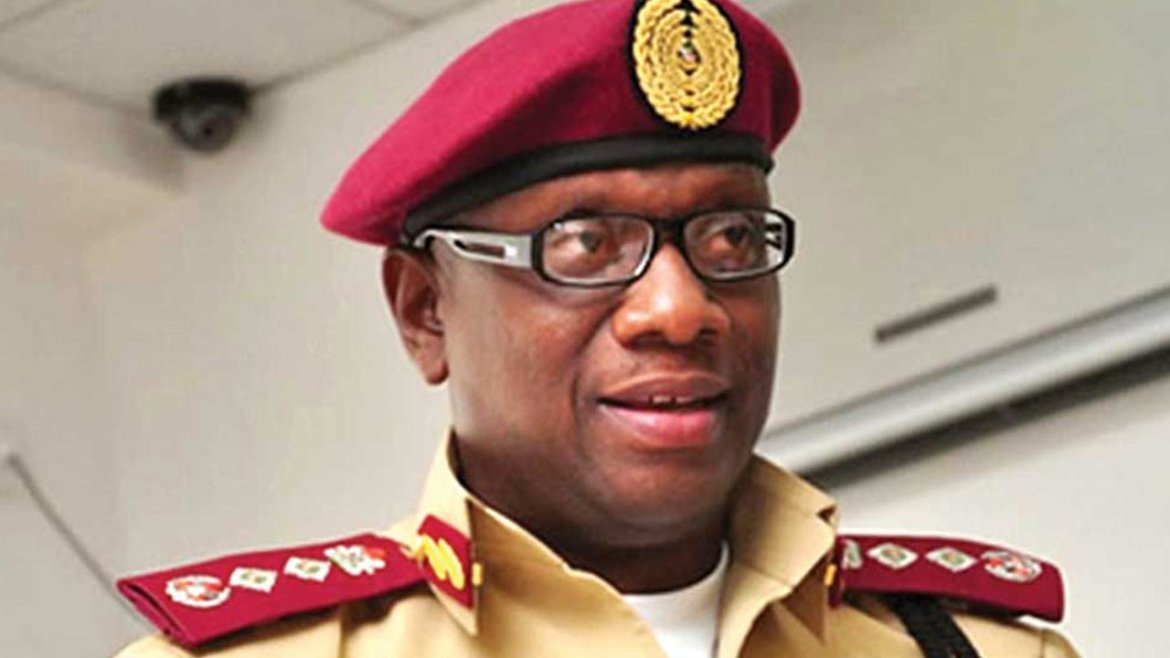 •How He Was Honoured @ The 21st City People Award

Over the last few months, Dr. Boboye Oyeyemi, the Corps Marshal of Federal Road Safety Corps (FRSC) has received great commendation from several quarters over the excellent way he has run that federal government parastatal. That was part of what earned him his most recent award as The CEO of the Year at the last City People Awards for Excellence. His agency also won The Best Run Government Agency of The Year Award.

Many don’t know he was born in Ibadan, to the family of Reverend Michael Babalola of Odo Owa in Oke Ero Local Government Area Council of Kwara State. The institutions he attended and obtained various certificates included the Polytechnic Ibadan, University of Lagos, Harvard University School of Government, Royal Institute for Public Administration (RIPA), London, the prestigious National Institute for Policy and Strategic Studies (NIPSS) thus becoming a proud member of the Alumni Association. He holds a Doctor of Philosophy (Ph.D) degree in Transport Administration from the University of Nigeria, Nsukka (UNN).

He has both vast field operations and administrative experiences at the National Headquarters. In the field, he was Zonal Commanding Officer severally, including being in charge of Zones RS4 Lagos, RS3, Yola and RS9, Sokoto. He served in several strategic roles at the FRSC National Hedaquarters as Acting Director (Operations), 1999; substantive Director (Operations), 2001; Director (Motor Vehicle Administration), 2003; Assistant Corps Marshal (Operations), 2005; Assistant Corps Marshal (Planning Research and Statistics), 2006; Assistant Corps Marshal (Training Standards and Certification), 2008; Assistant Corps Marshal (Operations), 2009; Deputy Corps Marshal (Operations), 2010; Deputy Corps Marshal (Motor Vehicle Administration) in Apr 14 until his appointment as Corps Marshal on 23 Jul 14.
His recognition and honours include: 2012 Biographical Man of the Year Award of the American Biographical Institute, USA; Member of the Order of the Federal Republic (MFR), 2006; National Productivity Order of Merit Award Winner (NPoM), 2015 and LEADERSHIP Public Officer of the Year award, 2015.
He is Member of several Nigerian and international professional bodies and a fellow of the Institute of Safety Professionals of Nigeria (ISPON); Chartered Institute of Logistics and Transport (CILT) London; Institute of Corporate Administration of Nigeria (ICA), Chartered Institute of Personnel Management of Nigeria (CIPMN). He is also Member, International Chiefs of Police, USA and a US trained Arms Instructor.
As Corps Marshal of the Federal Road Safety Corps, he is charged alongside his lieutenants with attainment of the UN Decade of Action on Road Safety (2011 2020), reduction of road traffic crashes and fatalities by 50% by year 2020, Accra Declaration of reducing road traffic crash fatalities by 50% by year 2015 as well as reversal of the trend of 43 deaths per 10,000 vehicles to minimum of 2 deaths per 10,000 vehicles and placing Nigeria among the league of global safest roads by the year 2020.

In the space of two years of his headship of the Corps, aside from the personal achievements, the Corps has fared positively with several recognitions which included; National Information Technology Development Agency (NITDA) Award as Best MDA e- government, 2014; Independent Service Delivery Monitoring Group (ISDMG) as Most Outstanding Service Delivery Agency in Nigeria, 2014/2015; winner of E-government Award for best government agency in 2014; Winner, best cycling campaign worldwide, 2014 of the European Cyclist’ Federation Campaign to motivate nations worldwide to adopt alternative to fuel burning thereby slowing down ozone depletion through the use of bicycle as alternative means of transportation; NITDA Award for best web presence category, 2015; Philip Consulting Award for best customers experience in web development, 2015; NIIA Nigeria technology award for Best use of technology agency and Technology Project of the Year, Government Agency category, 2015; first place award for the National Productivity Order of Merit Award (Corporate Category), 2015 and secured Federal Executive Council’s nod for the implementation of the Nigeria Road Safety Strategy (NRSS). He has 3 publications on road safety administration and numerous unpublished works to his credit.

Major activities of the Corps include; Preventing and minimizing Road Traffic Crashes through enforcement, cooperating with various agencies and groups engaged in road safety activities, educating members of the public on the proper use of the highways and providing prompt attention and care to victims of Road Traffic Crashes. The Organization has recorded significant milestone achievements in Road Traffic Administration and Safety Management both locally and internationally.
Through a series of administrative metamorphosis, the Corps is recognized by the World Bank as the best example of a Road Safety Lead Agency in Africa and has the honours of being a World Class Organization with its processes and procedures certified by the International Organization for Standardization (ISO) 9001-2008.

The use of technology to drive operations in the Corps has resulted in an integrated framework for enhancing internal national security and collaborative synergy with the internal security architecture of the Federation through effective data and information management.

FRSC has attained some feats in a number of national and international Road Safety targets and is on track towards realizing others. This includes;(a) Accra Declaration of 50% reduction in fatality by 2015 (b) Implementation of Nigeria Road Safety Strategy by 2018 (c) UN Decade of Action of 50% fatality reduction by 2020 (d) Vision 20:20:20 of the Federal Government (e) Sustainable Development Goals (SDGs) by 2030.

The Corps in its three decades of existence has taken giant leaps that has positively projected Nigeria’s image on the international scene. Beyond this, the FRSC is focused on making Nigeria a place where any road traffic crash occurring leads to zero death or severe injuries.

The 3 Things I Did To Revive NIMASA In 2 Years •DG NIMASA, DAKUKU PETERSIDE

How I Became Oyo State Commissioner For FINANCE –BIMBO ADEKANMBI