Court Orders Saraki, Akpabio, Other Ex-Govs Who Served As Senators, Ministers To Return Their Pensions 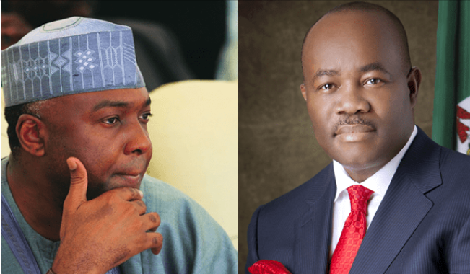 The Federal High Court in Ikoyi, Lagos, has ordered the government to recover all pensions collected by immediate-past President of the Nigerian Senate, Bukola Saraki, and other former governors now serving as ministers and members of the National Assembly.

The court also directed the Attorney-General of the Federation and Minister of Justice Mr Abubakar Malami, SAN to challenge the legality of states’ pension laws permitting former governors and other ex-public officials to collect such pensions.”

In the suit marked FHC/L/CS/1497/2017 SERAP sought for an order of mandamus compelling the AGF to recover the funds.

SERAP said it was concerned about “the attendant consequences that are manifesting on public workers and pensioners of the states who have been refused salaries and pensions running into several months on the excuse of non-availability of state resources to pay them.”

The rights group also argued that there is a need to recover such public funds collected by former governors.

It said it wrote a letter to the AGF to recover the pensions from several ex-governors, but that the government failed to do that.

Court Orders Saraki, Akpabio, Other Ex-Govs Who Served As Senators, Ministers To Return Their Pensions was last modified: December 4th, 2019 by Damilare Salami