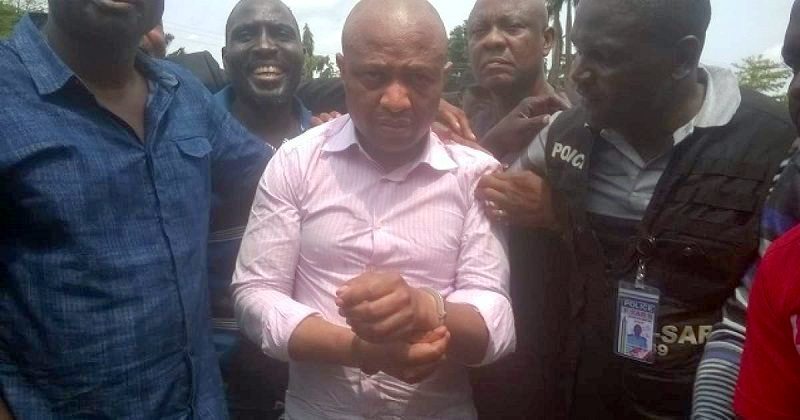 An Igbosere Magistrates’ Court in Lagos heard on Friday that kidnap kingpin, Chukwudumeme Onwuamadike, known popularly as Evans, was the driver of the vehicle used by the suspected to abduct one James Uduji.

Uduji told the court that Evans was also the “so-called doctor” that treated bullet wounds sustained by the abduction victim.

He made the revelation while giving evidence at the commencement of the trial of Evans, the Nnewi, Anambra State-born high-profile kidnapper, known for kidnapping mainly billionaires.

In the first charge, Evans is standing trial alongside Joseph Emeka, Ugochukwu Nwachukwu and Victor Aduba.

In the second charge, he is standing trial alongside Joseph Emeka, Linus Okpara and Victor Aduba.

At the resumed trial, Uduji narrated to the court how he was kidnapped on Sept. 7, 2015, by four armed men on his way home from his factory at Agbara in Ogun.

He told the court that the incident took place close to his house at 7th Avenue in Festac Town, Lagos.

Uduji said that the kidnappers were driving a Lexus 470 SUV at the time of the incident and that they shot several gunshots during the kidnap operation.

The witness said he was surprised at that point to see men shooting a gun, adding that he thought they were policemen.

“I was inside my Hilux van with my two drivers when the men came and pulled me out of my vehicle and dragged me inside their own vehicle.

“I was not blindfolded at this point so I saw the men clearly and the man at the steering with a gun was Evans. He is the only one I can recognise among the four,” Uduji said.

The witness also said that when he was dragged out of his vehicle, he noticed that he was stained with blood. “I then realised I sustained bullet wounds”.

Uduji said that the kidnappers called a doctor on phone, who treated his bullet wound at their destination.

The witness said he was giving two tetanus injections for seven days, adding that Evans was the so-called doctor, who treated him.

He said that he stayed for 45 days in captivity and that a ransom of 1.2 million dollars was paid before he was released by the kidnappers.

Counsel to Evans, Ajanaku, said that the specific date when Uduji was released from the kidnappers was not mentioned in the statement which the witness made at the police station.

He also said the date on which the witness testified he made the statement at the police station did not tally with the date at the body of the statement.

He said that he sustained bullet wounds from the kidnappers’ gunshots, adding that he pretended to be dead when he sustained the wound.

Ugoeze said he was taken to the hospital by some people after the kidnappers took his boss away.