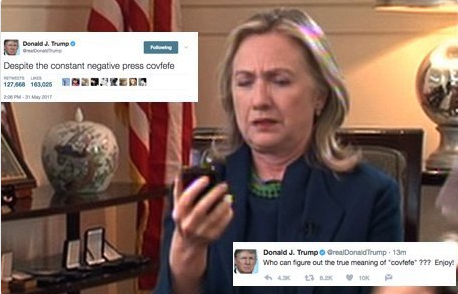 When an ordinary man makes mistake, his punishment comes only with a few trolls and shades, but when the President of the United States does, even the citizens will take his case to heaven to ensure he gets no forgiveness. This is the case of president Trump when he tweeted ‘Despite the constant negative press covfefe’.

No one seems to know what ‘Covfefe’ means, at best it’s seen as a typo and it has now started a trend with countless memes on American Twitter. The error still remains unchanged on Trump’s timeline over two hours after and Americans are having a filled day giving the word ‘Covfefe” different meanings.

#covfefe is gone. But not before 160k likes. pic.twitter.com/zFzBNSbWsR

Come get your #covfefe fix this morning pic.twitter.com/ygopQosyCs

#Covfefe will destroy us all pic.twitter.com/KAKFYIc9P3

We were all holding the orb, and then I got a message…#covfefe, it said. And I said yesssss, #covfefe. It is our secret… pic.twitter.com/BUfD8tvKfq

Trump deleted #Covfefe at 6am ??? pic.twitter.com/14cLBlEN6U

We've all been there… #covfefe pic.twitter.com/13IXRswPqh

On Covfefe, @PressSec reassures the American people: "The president's tweets speak for themselves!"#Covfefe by @realDonaldTrump pic.twitter.com/lIFDeGggnQ

I just woke up and am pleased to see that I don't seem to have missed anything concerning the real meaning of #Covfefe pic.twitter.com/eeZV6DqUSZ

#Covfefe: One innocent typo lands President Trump in trouble… was last modified: May 31st, 2017 by Reporter

‘We don’t talk when Fayose talks because he is desperate for publicity’, Garba Shehu shades Ekiti Governor