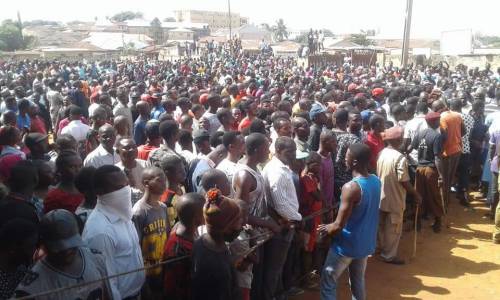 Trouble broke out on Monday in Kubwa, a satellite town in the Federal Capital Territory, as angry residents attacked a council chairman and palliative committee members over plans to divert relief items meant to help them cushion the effects of the Coronavirus lockdown.

SaharaReporters gathered that the relief items was scheduled to have been brought and shared on Sunday but arrived on Monday.

Findings revealed that a councillor at Bwari Area, Mallam Musa Yusuf, attempted to conspire with the FCT Palliative Monitoring Team to divert the items.

The situation got many of the residents infuriated and eventually led to chaos.

Trouble started when the security agents tried to control the crowd that thronged L.E.A Primary School Byazhin, venue of the event, which later turned violent.

The angry mob pelted and hurled stones and dangerous objects at Chairman of Bwari Area Council, Dr John Gadaya, and other officials.

The mob also descended on his car and smashed the windshield in the process.

It took the intervention of armed policemen, who fired gunshots into the air to disperse the crowd.

A policeman was said to have sustained injuries and rushed to a hospital for treatment.

The trucks that brought the food items were later taken away on the orders of the council chairman.

SaharaReporters had earlier told the story of how officials of FCT Administration distributed ‘dirty’ rice to the Dutse residents as palliative.