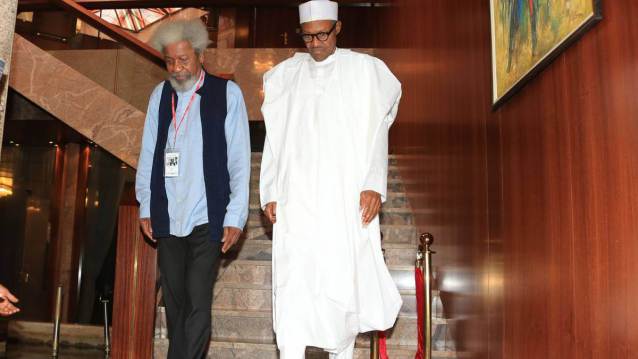 Africa’s first Nobel laureate, Wole Soyinka, has described the current clash between herdsmen and farmers as history repeating itself.

In 2018 alone, over 80 people have been killed across Benue state, with Kaduna also recording deaths from herdsmen crisis.

In an article released on Wednesday, the scholar likened the situation to what happened with Boko Haram during the Goodluck Jonathan administration.

He called on President Muhammadu Buhari to act and save lives.

LIVING IN DENIAL
According to Soyinka, President Muhammadu Buhari and his government are in denial like former President Goodluck Jonathan refused to accept that schoolgirls had been kidnapped from Government Secondary School, Chibok, Borno state.

Jonathan had first thought that the reports of the kidnap of 276 girls were not real. It took two weeks for him to act.

“President Muhammed [sic] Buhari and his government – including his inspector-general of police – in near identical denial, appear to believe that killer herdsmen who strike again and again at will from one corner of the nation to the other, are merely hot-tempered citizens whose scraps occasionally degenerate into “communal clashes”

“The marauders are naughty children who can be admonished, paternalistically, into good neighbourly conduct. The sustained, killing monologue of the herdsmen is what is at issue. It must be curbed, decisively and without further evasiveness.

“Yes, Jonathan only saw ‘ghosts’ when Boko Haram was already excising swathes of territory from the nation space and abducting school pupils. The ghosts of Jonathan seem poised to haunt the tenure of Mohammed Buhari.”

‘COW’S LIFE MORE EQUAL THAN OTHERS’
Soyinka said Nasir el-Rufai, governor of Kaduna state, claimed to have traced herdsmen to locations outside Nigeria and paid them “reprisals for some ancient history and the loss of cattle through rustling” to cure their “homicidal urge.”

The brilliant writer said at the time el-Rufai’s comment was: “No life is more important than another” but at the moment, the statement “needs to be adjusted, to read perhaps – apologies to George Orwell: ‘All lives are equal, but a cow’s is more equal than others’.

“I could only call to mind a statement by the same El Rufai after a prior election which led to a rampage in parts of the nation, and cost even the lives of National Youth Service corpers. They were hunted down by aggrieved mobs and even states had to organize rescue missions for their citizens,” Soyinka said.

“Countering protests that the nation owed a special duty of protection to her youth, especially those who are co-opted to serve the nation in any capacity.”

WE MIGHT BE INVITING STARVATION
The ‘Lion and the Jewel’ writer said the current situation is promising the plague of starvation that affected some countries in Africa where farmers were expelled from their farmlands.

“It is true that I called upon the government a week ago to stop passing the buck over the petroleum situation. I assure you however that I never intended that a reverse policy should lead to exonerating – or appearing to exonerate – mass killers, rapists and economic saboteurs – saboteurs, since their conduct subverts the efforts of others to economically secure their own existence, drives other producers off their land in fear and terror,” he said.

“This promises the same plague of starvation that afflicts zones of conflict all over this continent where liberally sown landmines prevent farmers from venturing near their prime source, the farm, often their only source of livelihood, and has created a whole population of amputees.”

HERDSMEN HAVE DECLARED WAR ON NIGERIA
While commending Audu Ogbeh’s vision of creating ranches and cattle colonies, Soyinka sad the present national outrage is about how they are getting away with their actions.

“It rejects the right of any set of people, for whatever reason, to take arms against their fellow men and women, to acknowledge their exploits in boastful and justifying accents and, in effect, promise more of the same as long as their terms and demands are not met.

“In plain language, they have declared war against the nation, and their weapon is undiluted terror. Why have they been permitted to become a menace to the rest of us? That is the issue!”

IPOB DIDN’T COME THIS FAR
He said while the government was quick to declare the Indigenous People of Biafra (IPOB) a terrorist organisation, it has treated the killings by the herdsmen like they are “the norm.”

The Nobel laureate wondered why President Muhammed Buhari “appears to believe that killer herdsmen who strike again and again at will from one corner of the nation to the other, are merely hot-tempered citizens whose scraps occasionally degenerate into ‘communal clashes”.

“I am not aware that IPOB came anywhere close to this homicidal propensity and will to dominance before it was declared a terrorist organization. For the avoidance of doubt, let me state right here, and yet again, that IPOB leadership is its own worst enemy”he said.

“However, as we pointed out at the time, the conduct of that movement, even at its most extreme, could by no means be reckoned as terrorism.

“By contrast, how do we categorize Myeti? How do we assess a mental state that cannot distinguish between a stolen cow – which is always recoverable – and human life, which is not?”