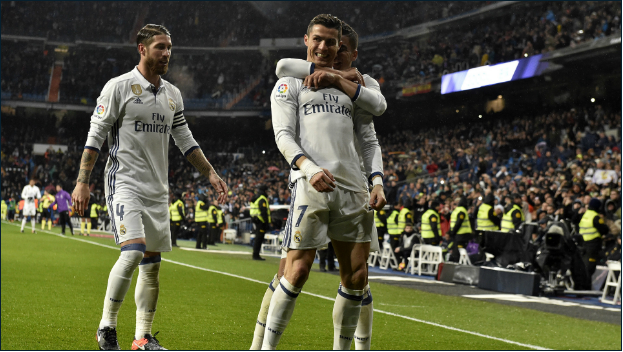 Cristiano Ronaldo’s crisp chip was a wonderful way to turn the jeers into cheers and after Inigo Martinez was sent off, the lively Alvaro Morata made it 3-0 against lowly Real Sociedad.

An emphatic win in the end, and just what Madrid needed after a week which had brought both doubts and criticism following their exit from the Copa del Rey at the hands of Celta Vigo.

Things could hardly have gone better for Real Madrid this weekend. As Atletico, Barcelona and Sevilla all lost ground in the title race, Zinedine Zidane’s side moved clear at the top of La Liga. It was the perfect end to a testing few days for Los Blancos.

Following their elimination from the Copa del Rey on Wednesday and a recent dip in form, Madrid came into this match against Real Sociedad under pressure and there were jeers for Danilo, Karim Benzema and Fabio Coentrao prior to kick-off.

And then, following a slow start against a Sociedad side making life difficult with some solid pressing, the supporters also turned on Cristiano Ronaldo after the Portuguese lost possession in the opening period.

The 31-year-old has been questioned of late and did not like it when the fans jeered, turning to face them in a defiant gesture. However, it seemed to fire him up as he improved later in the game and produced a fine finish to make it 2-0 after Mateo Kovacic had netted the opener.

Kovacic has come on leaps and bounds in his second season at the Santiago Bernabeu, and after marking this match with his first Liga goal of the campaign it was he who put Ronaldo through to make it 2-0 minutes after the interval.

On Saturday, Atletico dropped two points in a goalless game away to Alaves and then, on Sunday, Barcelona were held to a 1-1 draw at Betis before Sevilla lost 3-1 at Espanyol. So all of Madrid’s title rivals fell back and suddenly, everything looks brighter for Zidane’s side.

Madrid are now four points clear of both Barca and Sevilla at the top of the table, with Atletico a further six adrift. And on top of that, Los Blancos still have a game in hand due to their participation in the Club World Cup