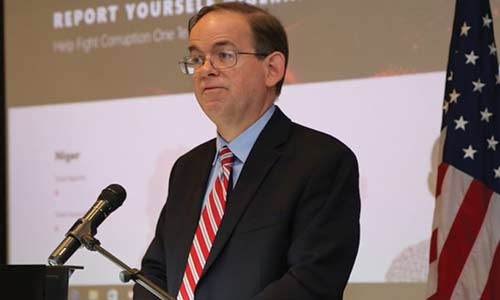 The acting US ambassador to Nigeria, David Young, says there is a “culture of impunity” in Nigeria, making people get away with serious crimes.

PUNCH reported that Young, who is the deputy chief of mission and charge de affaires, US embassy in Nigeria, said the “culture of impunity” is behind the killings and other acts of injustice in the country.

He said the administration of US President Donald Trump consoles with families of victims of the killings and remains committed to the sustenance of peace and unity in the country.

The diplomat said there is a need to address the killings to ensure they do not affect 2019 elections.

“On behalf of the United States government and American people, I want to express again our condolences on the tragic loss of lives across Plateau, north-central and north-west states,” Young said.

“Quite a lot of people have died; it has been very terrible tragedies. We want to affirm the sanctity of human lives and anytime a person dies, it is a tragic loss, be that person a Christian, Muslim, Berom, farmer or herder.

“The Nigerian government should strengthen its laws to deal with killers; I think it is clear, we know and government knows that as well.

“A lot of people are doing good things and working hard. But it needs to be even more because it is clear that there is a climate of impunity. When people are committing serious crimes, they get away with it, without being brought to justice.”

He urged President Muhammadu Buhari to ensure free and fair elections in 2019, devoid of any violence.

“We want partners in ways to ensure that the kind of violence we have seen over the past months don’t flare up in any election,” Young added.

Culture of Impunity Makes People Get Away With Serious Crimes In Nigeria – US Ag Ambassador was last modified: August 21st, 2018 by Damilare Salami