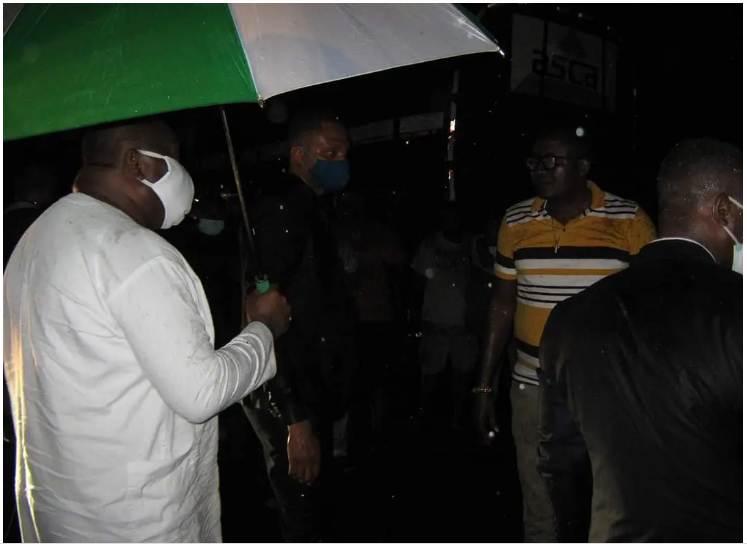 Governor Ifeanyi Ugwuanyi of Enugu State, Tuesday night, defied the heavy downpour in the State as he led a team to enforce the overnight curfew imposed across the country by President Muhammdu Buhari.

The 8 p.m. to 6 a.m. curfew is part of the measures put in place by the Federal Government to curtail the spread of the coronavirus disease.

Governor Ugwuanyi, who has personally been monitoring the ban on interstate movement across the state’s borders, took time to also enforce the curfew.

DAILY POST reports that apart from defaulting residents who were caught driving during the curfew, the Governor’s team also intercepted a trailer load of cattle with 13 men hidden on the floor of the vehicle.

The trailer was forced to stop at the Emene axis of Enugu at about 9 pm.

During a proper search, it was discovered that some humans were hidden on the floor of the vehicle.

Under interrogation, the 13 men, including the driver of the vehicle, claimed they were cattle traders and were coming from Bauchi.

The Governor was concerned how such a number of people found their way into the state under the pretence of transporting cattle.

Asked why they were travelling nocturnally and clandestinely, they replied they were not aware of any curfew and closure of interstate borders, claiming also that they lost their way while trying to beat security checks.

They were handed over to the Emene Police Division for further action.

Just at the Orie Emene, the team intercepted 3 vehicles fully loaded with goods and said to be heading to Ogoja in Cross River State.

The vehicles were coming from Onitsha and had beaten the security at the Enugu-Anambra boundary when luck ran out of them on their way to Ogoja, via Ebonyi.

They also claimed they were unaware of the curfew imposed by the Federal government.

The tyres of their vehicles were deflated and keys handed over to the Emene Division of the Nigeria Police.

The team had earlier dispersed traders at the New Artisan Market axis, with a stern warning that they would face severe punishment if caught a second time.