Who Is Currently Killing The Game? Tiwa Savage OR Simi 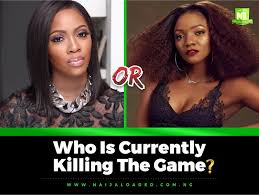 Men are always the President, always the Chairmen, the CEOs and it is rare to see any women leading.

However, that fact is changing and women have been re-orientated to always lead and occupy. The same thing happening in the music industry. Then, there was no known “Lady Superstar” in the music scene.

We had Dbanj, 2face, M.I killing the game and shutting down shows but there was no lady then. There was no one we could call the queen of music in Nigeria.

Sasha P showed us glimpses, Eva Alordiah too, we also had Asa doing alternative but how many people are listening to alternative genre? Waje too was there but no one was it then compared to the guys.

However, there has been an evolution in the last few years that has been giving the men a run for their money.

Yemi Alade, Tiwa Savage, Seyi Shay, Niniola have stepped up with so much tenacity.

2017 was really a hot year with most of the females dropping albums and hit singles. Specifically, Simi and Tiwa Savage have been at the top of the game so far.

Tiwa Savage has been exceptional for the last one year. After a tumultuous period where she had problems with TeeBilz, her music was on a decline and other females had started to come to the scene.

Niniola had started to take over with “Maradona”. Tiwa Savage resurfaced, she dropped “All Over” and afterwards announced her Sugarcane EP.

The EP became an instant hit due to “Ma Lo” with Wizkid. The song is still trending and was one of the best songs of 2017. It placed her back to the top spot and her star has continued to soar in 2018.

Simi on the other hand was relatively known in the entertainment industry. We know her for that song “Ara Ile” when she was a gospel artiste ?

However, she won our heart way back to the scene with “Jamb Question”. Sensing people had started to fall love in with her special type of alternative-pop genre, she released “Tiff“.

However, her dolorous voice and lyrics on Falz‘s “Soldier” stood her out and has since continued to work her way to the top.

Her album, “Simisola” was on every “Top 5 album of 2017” list and some even voted it as album of the year even displacing Wizkid‘s “Sound From The Other Side” EP.

Several artistes have paid homage to her song writing prowess and even Wizkid was obsessed with Simi for a period last year.

Both Simi and Tiwa Savage are like Wizkid and Davido in the Female aspect of the Music Industry. Both are currently killing the game, shutting down shows and dropping hit singles.

However, if you were to choose between ?

Who Is Currently Killing The Game? Tiwa Savage OR Simi was last modified: March 14th, 2018 by Igbokwe John

Why Nigerian dancers are not appreciated enough – Kaffy