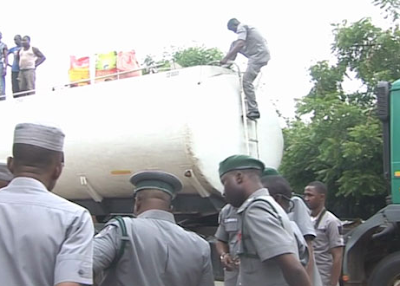 Customs officials in Kaduna state have intercepted a tanker stacked with various brands of foreign parboiled rice numbering over 1,000 bags.

This arrest comes months after the Federal Government announced of plans to close land borders due to massive smuggling of rice into the country.

The Comptroller of Customs Federal Operation Unit zone ‘B’ Kaduna, Usman Dakingari told journalists on Wednesday that since this announcement, rice smugglers have devised new methods to beat Customs surveillance.

Therefore, the smugglers stacked thousands of bags of 50kg bag rice in petrol tankers to give the impression that what they are carrying are petroleum products.

He noted that the smugglers were arrested after intelligence information and regular surveillance by customs officials in Kaduna State.

Dakingari revealed further that the smugglers have also devised the method of mixing bags of rice inside bags containing grain, adding that this is to give the impression that the bags contain only maize.

The Customs comptroller vowed that he and his men are determined to rid the zone of smugglers. He adviced those who engaged in smuggling to desist from the illegal act or be prepared to face the wrath of the law.

Chinese Billionaire Falls To His Death During Business Trip