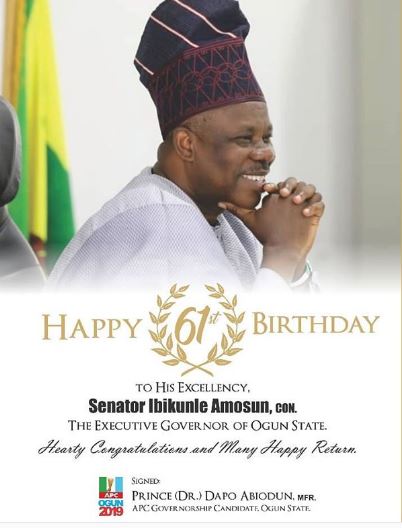 Against the perception of many that there is war going on within the Ogun APC structure, the Gubernatorial candidate of the ruling APC, Dapo Abiodun, has sent a warm greeting to the governor, Senator Ibikunle Amosun, has he clocks 61.

The APC flagbearer took to his Instagram Handle with a carefully decorated banner to celebrate the two-term governor and wishes him a prosperous years ahead.

Governor Amosun and Dapo Abiodun have been at loggerheads after the party working committee had upheld the candidacy of the latter over the preferred choice of Amosun, Adekunle Akinlade, a candidate from the governors’ alternative party, Allied Peoples’ Movement, APM