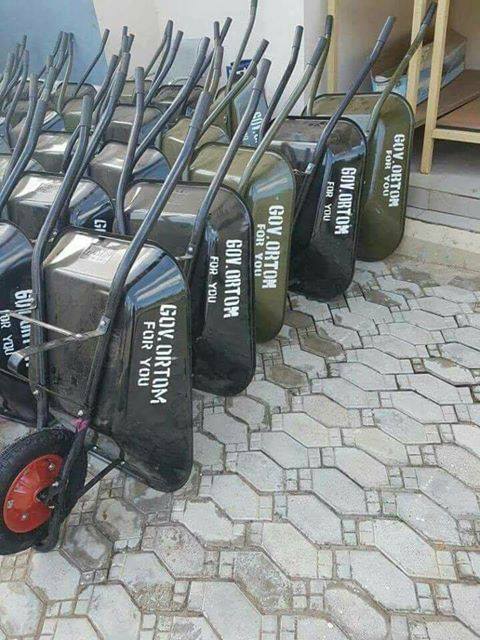 Mark, had while commissioning Brick House and the chapel at government house, Port Harcourt, mocked his state governor, Ortom for distributing wheelbarrows while others were busy building roads and brides.

Ortom in his reply said Mark had totally disconnected from his people and was only jealous of his achievement.

“Mark’s statements smack of a man who has obviously been disconnected with the very people who voted him. His utterances also exude envy against Governor Ortom who is succeeding where Mark has failed. In Benue South which Senator Mark represents, the Ortom administration has embarked on a number of projects for the people,” Ortom said.

Mark in a reply by his media aide, Paul Mumeh described Ortom as a confused fellow who does not deserve to be a governor.

Mark said, “Unarguably, It would have made a huge political capital for Governor Samuel Ortom of Benue state and his handlers to maintain sealed lips over this ill – fated ‘Ortom de Barrow’ saga.

“Honestly, it is not our style or character to respond to or give official seal to innuendos espoused in the guise of officialdom. But for the less knowledgeable, one is tempted to offer clarification Like Uthman Dan Fodio “Truth is an open wound, only truth can heal”.

“The news is in the market places and even the blind can see the reign of Wheel Barrows as youth Empowerment gimmick in Benue state under the watchful eyes of Ortom.

“The Immediate past President of the Senate Senator David Mark is not known for pretenses. He is ever pointedly frank and blunt. He calls a spade its rightful name no matter whose ox is gored .

“Senator Mark did not say anything new or beyond what Nigerians already knew about the Ortom’s Barrow when he spoke in Port Harcourt , Rivers state at the commissioning of Brick House ( Government House) on Tuesday . But like a true statesman he is, he merely held the mirror so that the society can see its reflection, if you don’t like what you see, breaking the mirror will not change anything , and casting aspersions or embarking on a fruitless voyage of character assassination cannot change anything because the truth of a man cannot be dissolved in his own blood.

“What is there to envy Ortom about. In fact, Ortom deserves pity. He needs help because the sorry state of affairs in Benue state have unarguably overwhelmed him. Is it the volume of unpaid salaries to workers, leading to industrial actions , the unabating insecurity in the land leading to lost of thousands of lives and property to the state of despondency under Ortom that Senator Mark should be envy of.

“Remember this is a man ( Mark) who was a state governor in his early 30s, a minister and the then youngest member of the Armed Forces Ruling Council (AFRC). It is on record that Mark is the longest serving Senator in Nigeria and president of the Senate for eight uninterrupted years. Ortom like every other NIGERIAN knew how Mark’s steady hands in the upper legislative chambers especially his invocation of Doctrine of Necessity saved the nation from the political logjam in 2010.

“If Ortom feels strongly about the concerns of Nigerians over his less than honest performance and not just that Senator Mark merely reechoed what the people already know, he should rise up to the challenge and serve the people of Benue state diligently and honestly. Ortom should ordinarily know that anything short of the welfare and security of citizens of Benue state amounts to a disservice to the state and clearly unacceptable to Senator Mark.

“The situation in Benue today should challenge any responsible government to roll up its sleeves and go back to work instead of perceiving the peoples’ comment from the prism of politics.

“Senator Mark is a respected statesman in whom every emerging leaders, like Ortom, should run to and draw from his experience and wisdom. It is a fruitless effort to drag his name to the mud.”

EDO2020 AND THE DIVISIVE POLITICS OF GODWIN...