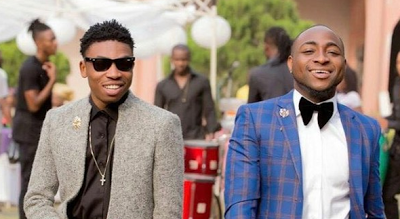 Davido’s signee, Mayorkun has confirmed that his boss didn’t only just brag about having N30bn in his account, saying indeed he has it or even more. In his recent chat with Potpourri on how much the Omo Baba Olowo is really worth, he said;

“First, we are our own artistes; we’re doing our own stuff,” he said, correcting the impression that artistes under DMW have been leveraging on the money and affluence of Davido to promote their respective music careers.

“ Talking about the money, no be me sing ‘30billion for the account o’, so everybody knows the person that has the money and they know the people who are just trying to be heard. I’ve money of course, I’m making my own money but you can’t compare my money to Davido’s. Davido actually has as much as 30 billion, if not more than that; David is from a very wealthy family so don’t doubt it; we’re just street boys they’re trying to help”, he said.

Davido has hit more than N30b in his account- Mayorkun was last modified: July 16th, 2017 by Reporter

No more shooting of movies, music videos outside Nigeria- FG