Details of What Buhari Discussed With Trump [READ] 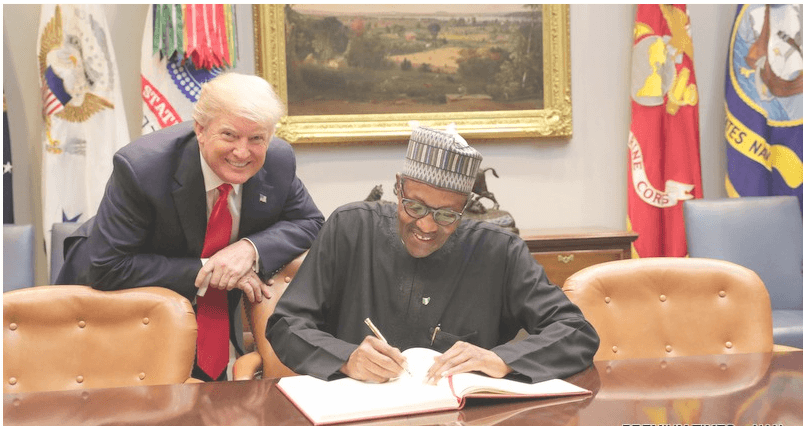 Mr Buhari announced this during a joint press conference with Mr Trump after a one-day official working visit to the White House.

The Nigerian president lauded the shared history of close and cordial relations between the two countries, saying it encompasses political, economic, military, social and cultural cooperation.

He said: “Our two countries maintain a strategic partnership for peace and security, conflict resolution as well as the global fight against terrorism.

“We also share common features as secular federal states, practicing a similar democratic model of governance and committed to the universal values of fundamental human rights and freedoms, free enterprise, social justice and the rule of law.

“President Trump and his team and myself and the Nigerian team discussed issues related to security, trade, governance, human rights and humanitarian crises.”

He recognised the strong U.S. support in Nigeria’s fight against terrorism and also appreciated very much the U.S. agreement to sell 12 Super Tucano A-29 warplanes and weapons to Nigeria to effectively fight terrorism.

“ We expressed gratitude for U. S. support in the reconstruction and rehabilitation efforts in the North East of Nigeria, as well as humanitarian assistance to the Internally Displaced Persons (IDPs), through agencies such as the United States Agency for International Development (USAID) and other international partners.

“The USA has been to date the biggest contributor to the humanitarian response and last year gave approximately 500 million U.S. Dollars in cash and in-kind contributions through the United Nations and other inter-governmental organisations.

“These have mainly supported protection activities, health, food assistance and shelter. We are doing all we can to secure the release of the remaining abducted school girls from Dapchi and Chibok.

“In this context, we will continue to welcome U.S. collaboration in intelligence gathering, hostage negotiations and information-sharing,” Mr Buhari said.

On violent attacks by herdsmen, Mr Buhari said the government was taking necessary steps to promote the peaceful co-existence of herdsmen and farmers, by focusing on boosting security and enforcing legislation that will guarantee herders and farmers access to land.

On economy, he said Nigeria very much welcomed increased US investment in the Nigerian economy, especially in the non-oil sector.

Mr Buhari said: “ Nigeria’s trade volume with the United States stood at 6.07 billion dollars, according to 2016 statistics and comprised 4.176 billion dollars worth of Nigerian exports to the U.S. and 1.894 billion dollars U.S. exports to Nigeria. We urged greater effort to increase these figures substantially.”

He thanked the U.S. government for the cooperation Nigeria had received in its effort to recover stolen funds.

“Our two governments have put the machinery in place for their respective Attorneys-General to collaborate in ensuring the return to Nigeria of over 500 million dollars of looted funds siphoned away in banks around the world.

“In this connection, we congratulated the US government on launching a Kleptocracy Asset Recovery Initiative which was spearheaded by the U.S. Department of Justice Asset Forfeiture and Money Laundering.

“We hope that we could continue to count on U.S. support in this area,” he said.

Details of What Buhari Discussed With Trump [READ] was last modified: May 1st, 2018 by Damilare Salami