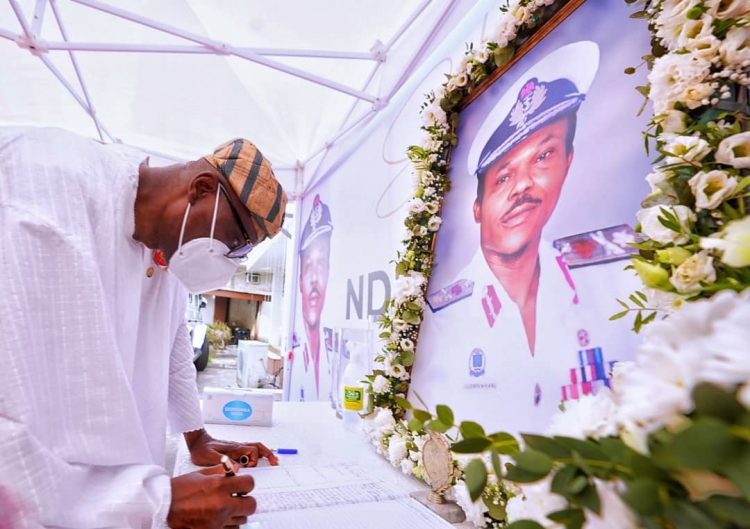 The rites of passage for late Real Admiral Ndubuisi Kanu (rtd.) is in top gear right now as his body is on its way to Ovim, his home town in Abia State.

On Friday October 8th, 2021, the Methodist Church Cathedral on the Lagos Island, the church where the deceased worshipped in his lifetime held Commendation Service in honour of a true devotee and respected member of the church.

The previous days, 6th October and 7th October saw the Lagos State Government hold “Day of Tributes” and “Commendation Service” respectively for the late Military Officer per excellence who was one-time the Military Administrator of Imo and Lagos respectively.

Both services were well attended by top government functionaries and eminent Nigerians. Mrs Gladys Ndubuisi Kanu, the widow of the late Admiral was there with other family members.

Recall that Rear Admiral Ndubuisi Godwin Kanu died on 13 January 2021, aged 77. According to the Burial Committee’s 7 Days Programme Schedule, all is now set as the remains of Kanu would leave Lagos for Owerri in Imo State on Wednesday 13th October where the Imo state government and the people of Imo State would pay him their tributes after laying his body in state at the state government house chapel.

The following day, Thursday 14th October would see the body of late Kanu arrive at his country home in Abia State as the state government organizes Service of Songs and Tributes in honour of their illustrious son.

Friday 15th October sees the final burial at his compound in his hometown, Ohoroho Ovim after which the family would host their respective guests at the popular Civic Centre in Ohoroho Ovim.

Sunday 17th October concludes the entire programme as Thanksgiving and Outing Service are held at the Methodist Church of the community.

Until his death, Kanu was among the ranks of Nigeria’s eminent democrats, activist and highly detribalized personalities. He was a typical example of a true Nigerian in words and actions. While he was in active service, the brilliant Kanu diligently served in diverse positions in the naval command. He served as Chief of Personnel, Naval Headquarters; Flag Officer, Eastern Fleet; Flag Officer, Naval Training Command; Chief of Naval Operations, Naval Headquarters and Director of Logistics, Joint Operations.

On January 13, 2021, the ranks of Nigeria’s eminent Democrats, activists and detribalised persons reduced with the unexpected departure of Rear Admiral Ndubuisi Kanu (rtd.) to the great beyond.

Born in 1943 in Ovim, Isuikwuato Local Government Area of Abia State, Ndubuisi Kanu joined the Nigerian Navy in 1962. He afterwards earned a B.Sc. at the National Defence Academy, India.

A major highlight of his illustrious military career was when he served as a military administrator in Lagos and the Imo States respectively.

It was, however, during the darkest hours of the country’s political history when the nation was at the mercy of a tyrannical dictatorship that Kanu stood to be counted among the very few ones that refused to bow to illegitimacy.

At a time when the mighty were cowed and the strong became weak, Kanu showed uncommon bravery as he spoke truth to power and dedicated his life for the good of the people.

Many upon retirement retreated to their cocoons and kept sealed lips to escape the ire of despots, but not Kanu. His voice against tyranny became even louder in retirement as a super naval officer. He joined forces with notable pro-democracy activists to demand good governance and better lives for the people. Kanu loved Nigeria and made no pretence for it.

During the clamour for the actualisation of the June 12 presidential election won by the late Chief Moshood Abiola and annulled by the military dictator, Gen Ibrahim Babangida (rtd.), pro-democracy activists within and outside Nigeria bravely operated under the National Democratic Coalition to prevail on the regime of the late Gen Sani Abacha to officially declare Abiola as winner.

Kanu didn’t sit on the fence. He joined the league of the activists at the risk of his life at a time NADECO members had three options loosely dangled before them by the Abacha regime: Exile, death or jail. The late military man eventually chaired the group’s action committee. He withstood tough times while some members went into exile amid scary threats to their lives.

Kanu, a lover of worthy causes for Nigeria’s progress and citizens’ comfort, was as solid as the Rock of Gibraltar against despotism. His foray into activism was marked with consistency, doggedness and grit.

When democracy returned in 1999, the deceased forged ahead in the struggle for good governance and featured prominently in annual events celebrating martyrs of democracy.

Kanu attended June 12 anniversaries and MKO Abiola’s posthumous birthdays among many other pro-democracy events. The Lagos State government also named a recreational park christened, “Ndubuisi Kanu Park” located at Alausa area of the state after the late naval officer who was also a director with the Fidelity Bank Plc.

Unapologetically wearing the characteristics of a democrat, despite being a general who had worked with the “oppressors,” Kanu would say he went into the military as a profession he loved, because it is a profession in which you do your best and come out of active service.

Soon, Kanu would become one of the strongest voices of the movement as he chaired the group’s action committee. While other ex-military who had also joined the movement feared being noticed, Kanu gave his signature to an ultimatum for Abacha to leave.

Despite the crackdown that led to the death of a couple of the activists, Kanu remained in Nigeria, agitating still, when many other NADECO comrades, understandably, fled into exile.

Your own safety and welfare come last,’” he responded when asked what motivated him to join the movement.

Of course, you won’t be in the good book of the then military regime the moment you identify with NADECO. It was the time Nigeria would record a high rate of human rights abuse, and zero regard for the rule of law. While some were killed or jailed, others went missing.

For Kanu, Nigeria may not work until genuine federalism is in place. Till his death, he had always called on successive governments to critically look into the matter. “For me, both empirically and historically, I am saying unless we do some things we have a big problem on our hands,” he said in an interview. “The first and major thing to be done is to take this country back to the only way it became a country and the only way it can continue. I will not be surprised even if some people reading this now do not understand what I am saying.

If we want things to improve, we have got to go back to federation which we are not and which is not being run right now, we only answer that in name.

We are running a unitary system of governance in the country.” His own ideology was that the countries we refer to as developed, especially the US, the real democrats there, are ex-military.

As a Military Governor, he brought in Town planners in March 1976 to prepare plan for Owerri. He built roads in Owerri metropolis and expanded the number of its local governments to 21. He founded the Imo state broadcasting service which went on air in December, 1976.

Late Ndubuisi Kanu was also the governor of Lagos State in 1977, leaving office in July 1978.

After his retirement, he freely gave full involvement in the progress of Lagos State by lending creative ideas as well as the fruits of his ample experience to successive administrations.

He contributed immensely to the development of the state during his short tenure of office and also demonstrated true belief and interest in the progress of Lagos state. He offered intelligent and meaningful advice, which always proved helpful in solving problems at critical times in Lagos State.

A strong believer and champion of Igbo cause, the late Admiral was one of the founding fathers of Ndi Igbo in Lagos. He was a think tank of Ndi Igbo businesses and professions and was known to have provided his property to host the meetings and secretariat of this body.

He was among leaders who spoke in January 2010 at a Lagos rally of the Save Nigeria Group calling for Vice-President Goodluck Jonathan be made acting president during President Umaru Yar’Adua’s illness.

The military governor has in the past 40 years, made himself a relevant part of the Lagos landscape, for which he was honoured by The Lagos State Government having a public open space called “Ndubuisi Kanu Park” at Ikeja.