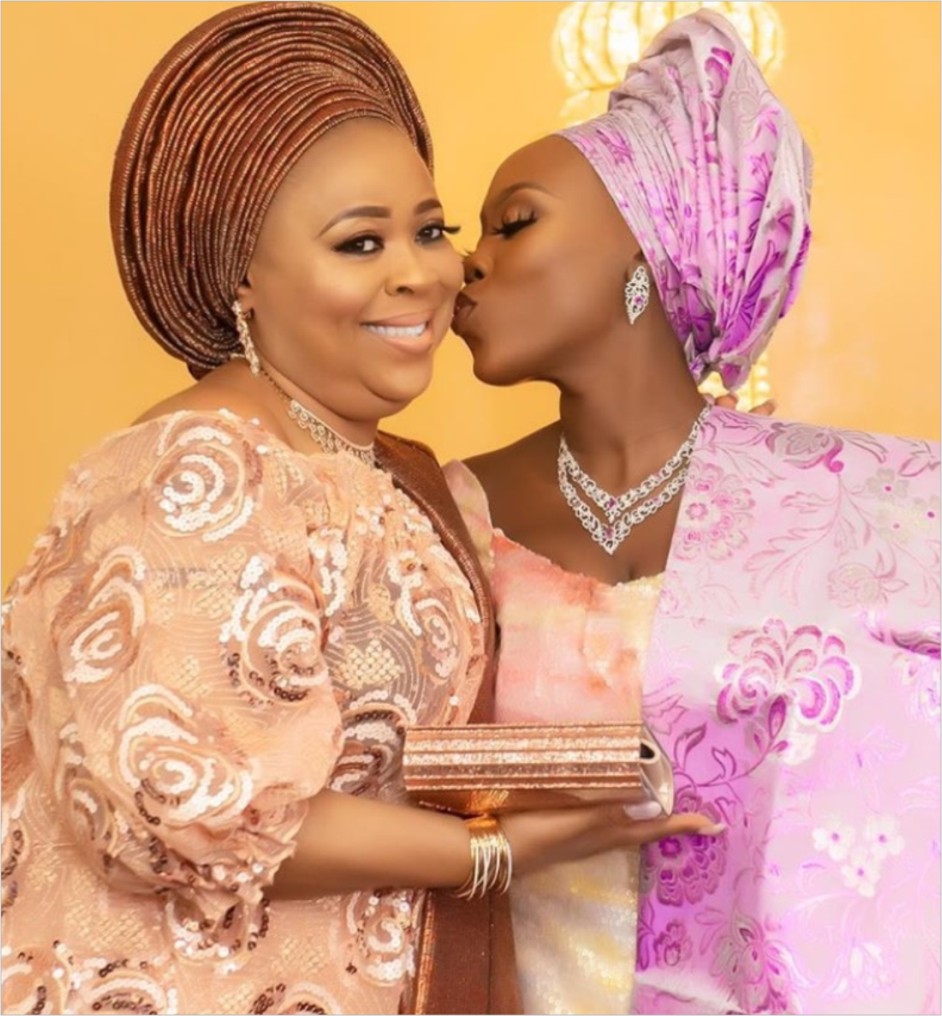 Details Of Her Classy Introduction

Otunba (Mrs) Folasade Adunni Risiquat Adesoye (a.k.a Sade Alesh), is bubbling with joy, as she celebrates her 56th birthday today.

As you are reading this, Lagos social establishment is putting finishing touches to the preparations to stage the mother of all weddings. The introduction of Miss Mayomi Ogedegbe, the pretty daughter of Otunba Folasade Adesoye, one of Lagos most celebrated and most-loved diamond merchants and luxury jeweller patronised by the rich and mighty in Nigeria is getting married.

Otunba Risikiyat Adunni, the pretty wife of Ijebu billionaire, Otunba Babatunde Gboyega Adesoye, is leaving no stone unturned to make sure that the wedding which comes up in the next 12 weeks will literally shake the whole of Lagos to its roots.

Mayomi Ogedegbe, who runs a popular luxury jewellery brand called “Meeyas Gold” on Victoria Island on Sunday, 17th November 2019, introduced her Bestfriend, Mofe, to her parents amid pomp and pageantry. The first leg of the journey to matrimony was a powder-blue monotone affair with many of the rich and mighty showing love and support to Mayomi’s parents, the Adesoyes.

The events paraded the likes of PDP’s chieftain, Prince Burji Kashamu, a former Oyo State Governor, Otunba Alao Akala; Construction Giant, Sir Olu Okeowo, Senator Musiliu Onanikoro, to mention a few. They were not just early callers at the event, they were all out to witness the historic event.

Of course, you know the mother of the bride doesn’t do her thing in small measure, despite being a private event, she made sure top Naija celebrity vendors were handsomely paid to cater to a large number of guests.

Otunba Folasade, whose daughter, the bride, looks like her was a cynosure when she danced in with her friends and business associates who all came out in their large numbers to show love to her. Otunba Folasade was seen rocking a luxury Rose Gold gown, which fits her body frame. Her rose-gold diamond also complemented her luxury Saco shoes as she danced her way into the hall with her handsome husband, Otunba Adegboyega Adesoye.

The memorable event also had the bride grandmother, Alhaja Audalat Araga-Sosanya, who is 92 years old. She was full of smiles as she led all her children to the event. Mama’s first child, Engineer Sola Ara-Sosanya, Alhaja Bukola Idiat Alli Balogun and Engineer Muyideen Sosanya.

Popular Lagos Fabric dealer; Alhaja Morufat Demola Shabi, who is not just a friend, but an in-law also made the event with her best friend, Alhaja Sekinat Steven.

Let’s gist you about how Mayomi Ogedegbe stole the show at her wedding. She was the cynosure of all eyes when she stepped out in a multi-colour purple Luxury HOH lace matched with a diamond set with a touch of Amethyst on 18K White Gold.

The Luxury HOH was beautifully designed by @twentysixthstitches, the younger sister of Adejoke Ogedegbe, while her unique Headgear was well styled by Celebrity Gele stylist  @taiwos_touch. What about Mayomi Melanin Pomping Skin? It was transformed by @ariyike_mua, while all her friends were beautifully dressed in powdered blue lace all from Morkal fabrics.

Mayomi’s handsome husband, Mofe, couldn’t take his eyes off Mayomi as she danced in looking like a pack of the diamond. Of course, we didn’t expect anything short of the standard. Mayomi, the bride, is the owner of Meeyas Gold Link, a baby company of Jewellery Affairs. Many silver spoon kids buy their diamond and Gold from her.

Mayomi dazzled many again when she came out in one of the luxury collections from Morkal, which was also transformed by Idera of Twenty-Sixth and Park.

The handsome groom wasn’t wanting either. Mofe is a private business owner. He came with his parents to seek the hands of Mayomi in marriage. The high point of the event was when he spoke Yoruba to Mayomi’s parents, saying: “mo wa bebe fun Iyawo mi Mayomi”, the whole hall burst into laughter. Mofe went to the best schools home and abroad. He is also one of the silver spoon in the mouth kids who combine brawn with brain. One could see in his eyes that he had found his missing rib.

Many of Otunba Folsade Adesoyes close sisters, like Mrs. Bimbo Pitan were all up and doing throughout the event.

We scooped the wedding would hold next year; 14th and 22nd of March and all the big names in the event business have been contracted.

It was learnt that the bride’s mum picked exotic Aso-Ebi that sells for N400k, while another set of Aso-Ebi will be sold for N150k.

Those who attended her son, Azeez Ogedengbe’s wedding to Adejoke, the daughter of Morkal Fabrics’ boss, in 2014 could attest to the fact that Mrs Adeshoye is well-loved.

Though we are not in 2020 yet, many of her friends have been preparing to storm the event.

Otunba Folasade owns a jewellery store, Jewellery Affairs, which is situated in Civic Center, Ozumba Mbadiwe Street, Victoria Island. She has been in jewellery business for over 20 years and was operating from her home before she opened her store in 2007. And over the years, she has come to win the love and adulation of most society ladies, who patronise her. Beyond her good sense of business style, Sade is also an embodiment of humility, grace and warmth.