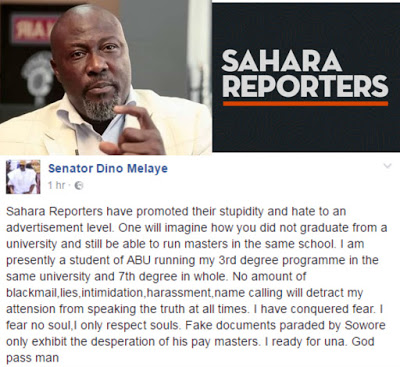 Senator Dino Melaye has come for Sahara Reporters for saying he never graduated from the Ahmadu Bello University, Zaria as is being claimed.

He took to his Facebook handle to attack the medium and also reveal that he is presently a student of ABU running his 3rd degree programme. He wrote;

“Sahara Reporters have promoted their stupidity and hate to an advertisement level. One will imagine how you did not graduate from a university and still be able to run masters in the same school. I am presently a student of ABU running my 3rd-degree program in the same university and 7th degree in whole. No amount of blackmail,lies, intimidation, harassment,  name calling will detract my tension from speaking the truth at all times. I have conquered fear. I fear no soul, I only respect souls. Fake documents paraded by Sowore only exhibit the desperation of his pay masters. I ready for una. God pass man”

Body of Man who jumped into Lagos Lagoon not yet found