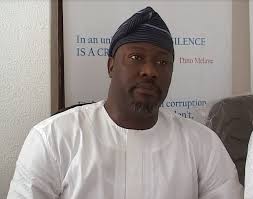 The Senator representing Kogi west Constituency, Dino Melaye has finally submitted himself to the Nigerian Police. IGP Ibrahim Idris and Dino Melaye Recall that Police since last week Friday laid siege to the Abuja residence of the embattled senator, in order to arrest and interrogate him over alleged homicide.

However, a video has emerged of senator Dino Melaye, coming out of his mansion, looking weary and pale as he collapse into the hands of the security men that took him away for interrogation

Police officers have been there for more than five days withno sign of the senator in his house. Melaye on his part, maintained that hewould continue to remain in his hideout, noting that the forces plan was toarrest and inject him with substance that would kill him.

However, owing to his refusal to surrender, Police disconnected his electricity and water supply and refuse to vacate his premises, noting that Melaye is wanted by the Police for a case of Criminal Conspiracy and Attempted Culpable Homicide, committed on 19th July, 2018, when Senator Dino Melaye and his armed thugs attacked Police personnel; shot and wounded Sgt. Danjuma Saliu, attached to 37 Police Mobile Force (PMF) on stop and search duty along Aiyetoro Gbede, Mopa Road in Kogi State.