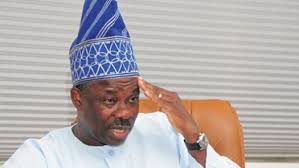 On the night of June 25, Ibikunle Amosun, a serving senator and former governor of Ogun State, issued a lengthy rebuttal to a PREMIUM TIMES story that exposed his curious surrendering of a massive cache of arms and ammunition to the police in Abeokuta, the Ogun State capital.

It was a day after our publication detailed how he hurriedly handed over 1,000 AK-47 rifles, four million bullets, 1,000 bulletproof vests and an armoured personnel carrier to the state’s police commissioner on May 28 — a day before he was due to vacate office after an eight-year tenure.

A nationwide outrage had greeted the story from Nigerians who were alarmed by the potential danger and impropriety of a governor stockpiling arms on such a large scale.

Amidst the uproar, Mr Amosun posted a lengthy denial on his Twitter page, in a desperate attempt to weaken calls for his arrest and prosecution for illegal arms possession.

The PREMIUM TIMES story, he said, “represented everything but the true and factual accounts” of his suspicious handover of stockpiled weapons to federal authorities.

Despite its untidiness, Mr Amosun claimed the handover was “a routine exercise” that was conducted in the open and that he got necessary approvals to import the weapons.

“We got all necessary approvals from the Office of the National Security Adviser to procure the 13 units of Armoured Personnel Carriers (APCs), the 1000 units of AK 47 rifles, two million rounds of ammunition,1,000 units of bullet proof vests and 500 bulletproof helmets and other security communication gadgets.

“Ogun State not only got approval to import these essential assets, the federal administration under President Goodluck Jonathan gave all requisite approvals to assist the state.

“The Federal Government through the Office of the National Security Adviser (NSA) issued the state the End User Certificate Serial Number 000001123 dated 5th of March, 2012.

“The Federal Ministry of Finance also granted Import Duty Exemption Certificate through a letter from the Honourable Minister of Finance and Coordinating Minister of the Economy with Reference Number BO/R.10260/S.4/T.4/22 dated 10th April, 2012. Indeed the supplier was an accredited agent of the Nigeria Police Force nominated for the job by the Force who also monitored and supervised the transaction.

“The security materials were cleared through the Murtala Muhammed Airport and confirmed through Nigeria Customs Memo NCS/MMAC/012/S.1,” Mr Amosun stated.

But after an extensive investigation that lasted several months, PREMIUM TIMES can authoritatively report that the end-user certificate and import waiver cited by Mr Amosun contained approval for importation of 13 armoured personnel carriers only.

Our findings disputed Mr Amosun’s claim and highlighted the extent to which the politician was willing to go to deceive the public and federal authorities on the matter.

Mr Amosun, 61, had written to President Goodluck Jonathan seeking to be exempted from paying import duty on 13 armoured vehicles he wanted to donate to the police in Ogun State. The request was made via a February 24, 2012 letter with Ogun State reference number: COS/GOV/11/VOL.II/236.

In the letter titled ‘Request for Duty Waiver on Imported 13 Nos. APC/SWAT Vehicles’, Mr Amosun thanked Mr Jonathan for backing measures taken to tackle insecurity in Ogun State, a support he said would be further bolstered by the approval of his request to import armoured vehicles for the police.

Mr Jonathan subsequently directed expedited treatment of Mr Amosun’s request by the Federal Ministry of Finance. An analysis prepared by Bright Okogu, the then director-general of budget, found that the import waiver would deprive Nigeria of N209 million in potential import duty on the 13 armoured vehicles.

Mr Okogu said the declared value of the 13 vehicles was $6.7 million (a little over N1 billion at the then exchange rate of N155 to a dollar) and calculated import duty of 20 per cent.

Nonetheless, Mr Okogu recommended that the waiver be granted as a way of encouraging Mr Amosun’s security efforts in Ogun State, documents seen by PREMIUM TIMES showed. On March 22, 2012, the president endorsed the request for waiver.

On April 10, 2012, a final import duty exemption certificate was issued to Ogun State Government for the importation of 13 armoured vehicles as requested by Mr Amosun for police use. The certificate carried reference number BO/R.10260/S.4/T.4/22, exactly what Mr Amosun quoted in his June 25 statement to the media

Meanwhile, as Mr Amosun was seeking duty waiver for the 13 armoured vehicles, he got an approval from the Office of the National Security Adviser to bring them into the country.

On March 5, 2012, an end-user certificate was issued to Alpine Armoring, an American specialised armoured vehicle manufacturer, for 13 armoured vehicles on behalf of Ogun State Government and for use by the police command in Ogun State.