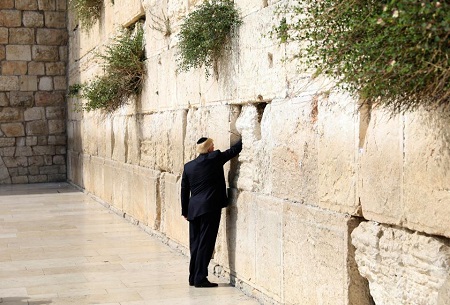 US President, Donald Trump has today made history as the first sitting US President to visit Jerusalem’s Western Wall – a fiercely-contested piece of religious land.
According to The Sun UK, Trump was photographed placing his hand on the wall, which is considered one of the most sacred sites in Judaism. The Western Wall is the holiest site where Jews can pray.
Trump, wearing a black skullcap, paused in front of it, then placed what appeared to be a written prayer or note between its stones, as is custom. He was not accompanied by any Israeli leaders. The Western Wall visit drew controversy before Trump even left Washington, when US officials declined to say whether it belonged to Israel.
“Jerusalem was and will always be the capital of Israel,” Netanyahu said late Sunday, adding that the Western Wall “will always remain under Israeli sovereignty”. The status of Jerusalem is ultra-sensitive and has been among the most difficult issues in Israeli-Palestinian peace talks.
Israel occupied east Jerusalem and the West Bank in 1967 in moves never recognised by the international community. It later annexed east Jerusalem and claims the entire city as its capital.
The Palestinians see east Jerusalem as the capital of their future state.
Donald Trump Becomes the First Sitting US President to Visit Jerusalem’s Fiercely-Contested Western Wall (Photos) was last modified: May 22nd, 2017 by Arinze Ago