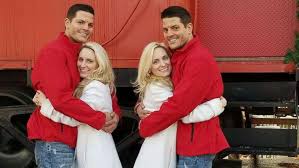 It’s a celebration of twins as twin couples who met on Twins Day get married by twin priests.

On the wedding day

The idea of marriages are meant to be pivotal but these twin couples took it a step further when on February 2, 2018, Josh and Jeremy Salyers, 34 popped the big question to Brittany and Brianna Deane, 32 respectively.

They all met at the Twins’ Day Festival in 2017 in Twinsburg, Ohio.

On August 2, 2018, they were granted marriage licenses at the Summit County Probate Court, to be married at the Twins’ day festival on August 4, 2018.

The Identical sets of Twins met at the twins’ festival, Ohio in 2017

On August 4, 2018, Jeremy married Brianna and Josh married Brittany, in a ceremony officiated by twin ministers at the world’s largest festival.

The newlyweds getting their marriage licenses on August 2, 2018

After the event, with both couples wearing matching outfits, Brianna added, “We knew that the chances were incredibly scarce. The stars had to align for our dreams to come true. I get to marry the man of my dreams and at the same time I get to look over next to me and see my twin sister marrying the man of her dreams.”

Brittany added, “It’s really been a fairy tale come true. Marrying twins is something that’s very important to us. Even when I was a little girl I can remember knowing that that is what we saw for ourselves.”