Home News EDO2020 AND THE ESSENCE OF A CONSISTENT MANIFESTO
News

EDO2020 AND THE ESSENCE OF A CONSISTENT MANIFESTO 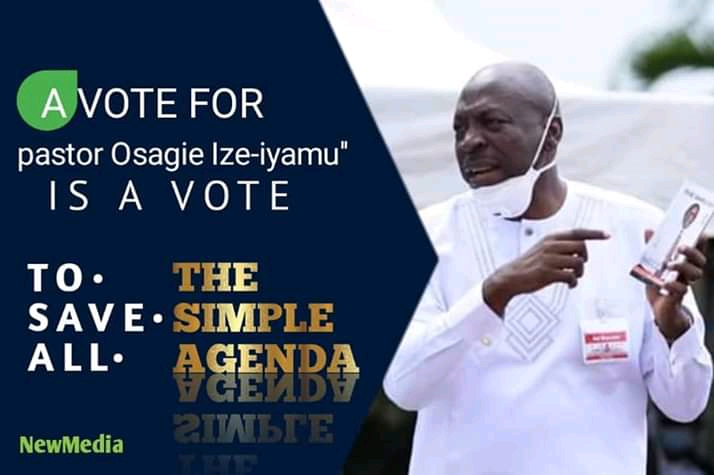 Preparing a manifesto which x-rays the intention of someone seeking an elective position is supposed to be the conventional practice everywhere in the world. But with the total disdain and the speed with which some politicians have abandoned their manifestoes immediately after winning an election, has made the electorates lost interest in manifestoes. They now see manifestoes, no matter how well crafted, as mere rhetoric.

While this apathy and nonchalant attitudes towards political manifestoes by the electorates might be partially justified, it also shows a poor sense of observation on those who fail to read between the lines when analysing manifestoes. As a political pundit, and from my experience in observing previous national elections, I have over the years learnt how to sift the main wheat from the chaff from any manifesto by simply following the history of the person.

So, what are some of the things to look out in a politician’s or the political party’s manifestoes?

These will include – his or her analysis of the issues confronting the constituents and consistencies; can they be fixed?

How to solve them, and; then a solid promise to fix them.

The campaign trail and electioneering moves and swings are subsequently focused on marketing the proposed solutions. For the politicians and political parties, they hope that the attractiveness and support for the manifesto will combine with other factors to catapult them to power. They then go-ahead to use the act of governance to implement the manifesto and create a legacy for themselves, at least this is how the script is imagined.

Since President Muhammadu Buhari started contesting for the President of Nigeria, far back in 2003, he has been consistent with the war against corruption. If such a person builds his manifesto around that idea, it goes beyond being political, it is what is dear to him, and it is his legacy.

The same goes for Adams Oshiomhole. Before his foray in partisan politics, Comrade Adams Oshiomhole has been a trade unionist who has built a name for himself as a fearless and progressive pro-masses advocate signposted by his many struggles for workers and the people of Nigeria. This was why the good people of Edo State stood solidly behind him in 2007 when he ran for the office of the Governor of the state. It is the same reason the people stood with him when he launched the “anti-godfather” initiative through the popular “one man one vote” campaign. His manifesto was consistent with his history, showing what is passionate to him.

Each time you read the manifesto of a public office seeker, instead of deriding him, or jumping into conclusion that it is mere rhetoric, take time to compare what is written with the history of the person. For example, someone who has been very vocal in spreading religious intolerance and ethnic bigotry cannot give you a manifesto that talks about unity and call himself a detribalized Nigerian, that is contradictory with what he is known for.

The challenge for this kind of assessment is when someone comes from relative obscurity to seek election. It becomes difficult to compare what is being said, to what has been previously said or done. A fresh example is the case of Governor Godwin Obaseki.

Four years ago, Mr. Godwin Obaseki came from absolute political obscurity to limelight, thanks to Comrade Adams Oshiomhole who dung out his profound and inventive persuasive and political marketing skills to sell and successfully got a neophyte to power. It was very difficult to rate it for obvious reasons. First, he wasn’t saying anything, save the sheepish smiles and the nods of appraisal each time comrade Adams tries to hype him before the electorates by giving him accolades he never earned.

The only time he spoke for himself was during the gubernatorial debate and he was roundly exposed and floored by his main opponent, Pastor Osagie Ize-Iyamu (POI). He was supposed to continue the lauded and well-inspired agenda of the APC whose foundation has been laid by the previous Edo State Government. Governor Obaseki simply failed to deliver. Instead, he retorted to shadow-boxing and media-washing of Memorandum of Understanding (MoU) crafted by consultants.

To this end, therefore, his failure today did not come to me as a surprise. He never had a vision for the position, it was just gifted him based on well-intended but wrong inferences. The man who made the mistake has since apologised to the Edo people and has committed to making the necessary and needed correction of the colossal error.

Pastor Osagie Ize-Iyamu on the other hand, had been consistent with his vision for the state. Since he left office as the Secretary to the State Government in 2007, he has kept his focus on being the Governor of the state with a clear road map of what he intends to do. With his political strength and network, representing his senatorial district at the Senate would not have been a herculean task for him, but he sacrificed all that for the big picture.

For him, it is not about the position but the legacy he craves to leave behind. The crystallization of this idea is what gave birth to #TheSimpleAgenda manifesto in 2016. If it was mere rhetoric after he lost out in 2016, why has he not discarded it and ‘cook up’ another story to share?

That brings us back to the point I am making. It is not about politics, it is his passion, his dream, his desire, his legacy for the state.

Does he have to be the Governor before his dreams for the state can be achieved?

That question sounds logical, right? Well, from experience, those who did not conceive the vision, hardly have the enthusiasm and motivation to drive it. The Simple Agenda manifesto had been in the public domain since 2016, why did Governor Godwin Obaseki not execute it?

As it stands, we are already four years late!

To be clear, the #POI SIMPLE agenda for Edo State is a set of well-thought-out plans and policies which are designed to address the key challenges facing Edo state at this present time and to prepare her for the future. The SIMPLE manifesto is one of hope that looks at #Security and Social Welfare; #Infrastructural Development/Urban Renewal; #Manpower Development and Training; #Partnership; #Leadership by Example, and #Employment creation and social empowerment scheme.

The SIMPLE agenda will deliver unambiguous and measurable goals and outcomes that will be shared by all Edo people and their communities. It is a manifesto that recognises that things need to start happening fast and better for the Edo people.

In essence, the manifesto places primacy on urgency and necessity of improving the welfare and wellbeing of the people in ways that restore hope and dignity.

For the opposition political party, the People’s Democratic Party (PDP), in trying to criticise the Simple Agenda manifesto of POI, by saying governance is a difficult task and not simple, shows their inability to give the state the needed leadership.

It clearly demonstrates their trivialization of the state of affairs of the dire state of the Edo people. It is the same party, then in opposition that analysed the Obaseki government and scored it a monumental failure. Pray, it is the same party that has inherited an APC disqualified aspirant and is now faced with the task of reversing itself.

It is also this dilemma that the PDP is showcasing as cluelessness and serial confusion in their banal efforts to use the APC 2016 campaign clips to de-market POI forgetting that this election is a referendum on Obaseki’s 4 years of failure.

In conclusion, as the campaign train moves from town to town across the state, I enjoin Edolites to keep the conversation going based on the manifestoes of the political parties and their candidates.

The people must refuse to entertain the frivolities, mudslinging and hollow electioneering antics of the political parties, especially the ones being made stagecraft by the ruling PDP.

The Politics of blackmail and calumny only help in making us make uninformed, biased, and lopsided decisions. Under a government with clear vision and purpose, four years is enough to make a remarkable impact in our lives, which is what POI has promised.

For the sakes of future generations, let’s join hands to move Edo forward.

EDO2020 AND THE ESSENCE OF A CONSISTENT MANIFESTO was last modified: August 17th, 2020 by Reporter

6 Mistakes You Must Not Make While Dating

Sen. BURUJI KASHAMU Told Me He Was Going To Die – His Campaign D.G, Aare REMI BAKARE Opens Up