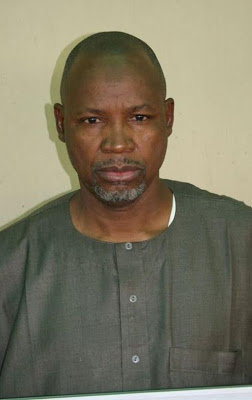 The Economic and Financial Crimes Commission(EFCC) today January 3, 2017 arraigned one Sule Yusuf Saulawa, a permanent secretary formally attached to the office of the Deputy Governor of Katsina State before Honourable Justice Sanusi Tukur of the Katsina High Court on a one count charge of Obtaining by False Pretense contrary to section 1(1)(a) of the Advance Fee Fraud and Other Fraud Related Offences Act, 2006.

The accused person who is a permanent secretary in Katsina but currently without portfolio allegedly obtained the sum of N2,500,000 ( Two Million, Five Hundred Thousand Naira Only) while he was attached to the office of the Deputy Governor of Katsina State from the complainant under the pretext that the then Deputy Governor’s office would award the complainant a contract for the supply of fertilizer to all the Local Government areas in Katsina State. 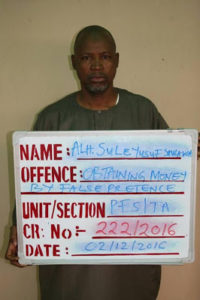 Saulawa obtained the money under the guise that it is for the purchase of bidding documents. It was further alleged that after obtaining the money from the complainant, the accused person cut contact with the complainant.

Investigation into the alleged fraud by the EFCC revealed through one Kabiru Dan-Asali who disclosed in his statement that he was present at the time the complainant, Musa Baba gave one Nasiru who is a boy to the complainant, the sum of N2,500,000 ( Two Million, Five Hundred Thousand Naira Only) on behalf of the accused person. The accused person also confirmed this in his voluntary statement he made to the EFCC.

Despite all this, the accused person pleaded not guilty to the charge when it was read to him in court.

In view of his plea, prosecution counsel, Sa’ad Hanafi Sa’ad requested the court for trial date and also asked that the accused person be remanded in prison custody. However, cousel representing the accused person Bashir Mohammed, moved a bail application praying the court to admit his client to bail pending the determination of the case.

Hanafi objected the bail application on ground that the accused person if granted bail, would likely jump bail because he had once dishonored the administrative bail granted to him by the EFCC. He added that instead of admitting the accused person to bail, the court shall order for a speedy trial of the matter.

The charge read that “You Sule Yusuf Saulawa while being the permanent secretary with the office of the Deputy Governor, Katsina State, sometimes in 2015 in Katsina, within the Judicial Division of the High Court of Katsina State with intent to defraud falsely obtained from one Alhaji Musa Baba, the Chairman of Many Agro Allied and Chemical Company Nigeria Limited and Diamond Fertilizer Nigeria Limited the sum of N2,500,000 (Two Million, Five Hundred Thousand Naira Only) by falsely representing that the Office of the Deputy Governor of Katsina State would award him contract for the supply of fertilizer to all the Local Government areas in the state and asked him to purchase a bidding documents which would be given to him as soon as he writes a proposal offering best price to the State Government which he did, but which you knew all to be false and you thereby committed an offense contrary to section 1 (1)(a) of the Advance Fee Fraud and Other Fraud Related Offences Act, 2006 and punishable under section 1(3) of the same Act”.

Justice Tukur remanded the accused person in prison custody and adjourned the matter to January 6, 2017 for ruling on bail application and commencement of trial