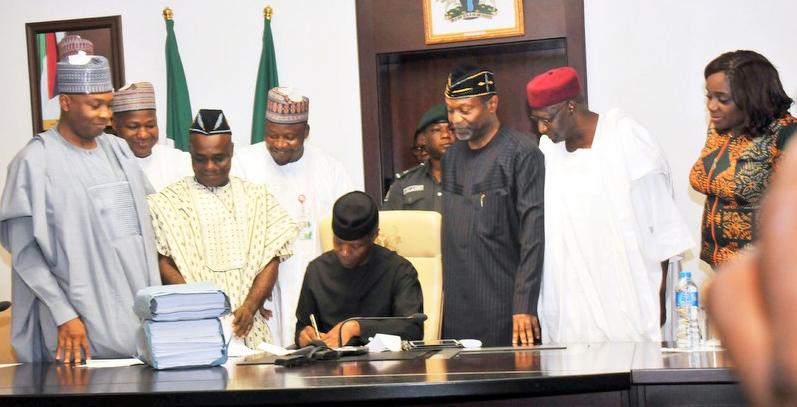 Yes the news has already broken and what is expected next is that all hands be on deck to ensure that the 2017 budget begins to materialize, you may say, considering that this is coming six months after it was first presented to the national assembly by President Muhammadu Buhari; truth is it has come to stay and everyone involved must play his role to ease the burden of recession on every Nigerian.

In this write-up, thecable takes a vivid look at the implications of this new budget and how it stands to help the Nigerian economy at large.

A strategic thrust of the 2017 budget is ensuring that Nigeria gets out of this recession and back on the path of growth.

Udoma Udo Udoma, minister of budget and national planning, had said at an Abuja town hall meeting that the budget was designed to take the country out of recession while assuring that Nigerians would experience its impact.

He had also said back in January that the federal government’s game plan through the budget is to “stimulate and attract private sector capital and private sector spending” with adequate government spending.

Operators of SMEs, Agro-Allied Businesses in Nigeria will soon smile

There is no doubt that Nigeria has in recent years “wasted” its large foreign exchange reserves through the importation of virtually everything: food, clothing, manufacturing inputs and even fuel.

Unfortunately, the country has the potential to produce most of these and even have enough to export to other countries.

This is possibly why President Buhari had, during the presentation the, said the budget will help bring an end to such imports.

Hear him: “We will increasingly grow and process our own food, we will manufacture what we can and refine our own petroleum products. We will buy ‘made in Nigeria’ goods. We will patronize local entrepreneurs. We will promote the manufacturing powerhouses in Aba, Calabar, Kaduna, Kano, Lagos, Nnewi, Onitsha, and Ota. From light manufacturing to cement production and petrochemicals, our objective is to make Nigeria a new manufacturing hub.”

Ahmed Lawan, senate leader, had told journalists that the national assembly earmarked funds for the construction of a second runway for the airport in the 2017 budget.

Lawan had said the project and some other projects were covered from the difference in the $42.5 oil bench mark proposed by the executive and the $44.5 passed by the legislature.

“We have been able to capture for example the second Abuja airport runway which we all need in this country; we have suffered from having only one,” he had said.

Improved partnership between the public and private sectors

The 2017 budget is clearly designed to expand the partnership between public and private sectors.

Udoma Udo Udoma had, during the public presentation of the budget proposals, said the budget includes development capital “to leverage and catalyze resources for growth.”

To actualize this, Udoma said the budget would focus on critical on-going infrastructure projects that have quick positive effects on the economy.

He said it will also “utilize special economic zones and industrial parks as vehicles to accelerate domestic economic activity for innovation and wealth creation, contribute to food security and create platform for agro-business in agriculture supply chains through the Agriculture Green Alternative Plan.”

So in the form of a rescue mission, the federal government had captured it along with the second Niger Bridge among the “critical economic routes” in the country to be fixed in the 2017 budget.

Babatunde Fashola, minister of power, works and housing, had while defending the 2017 budget proposal by the ministry, said the ministry had proposed a budget of N564.2 billion for the three sectors and parastatals under it.

‘Works’ alone accounts for N311.49 billion of the total sum.

New look for the Abeokuta Airport

Danjuma Goje, chairman of senate committee on appropriation, had while presenting the budget to the upper legislative chamber told the lawmakers that the committee had also captured the upgrading of the Abeokuta airport.

“The committee made some landmark interventions in the critical sectors of our national life,” he had said, and “this includes…the rehabilitation and upgrading of Abeokuta Airport.”

“We have also made adequate provision for the completion and take-off of Barinda Port under the Nigeria Inland Waterways.”

A bigger Tax base for Budget funding

A chunk of the key budgetary reform initiatives the 2017 budget aims at one direction: improving the revenue base of the country.

And to achieve this, the government plans to enforce additional oil-related revenue through royalty recoveries, marginal field licenses as well as early licensing renewals.

Nigeria’s debt profile has risen to about N19 trillion, following huge deficits from the 2016 budget, as a result of low oil prices and lower government revenue.

In 2017, the budget deficit is put at over N2 trillion. To finance the 2017 budget, the government will not just be required to broaden the tax base, but also take some loans to bridge funding gap.