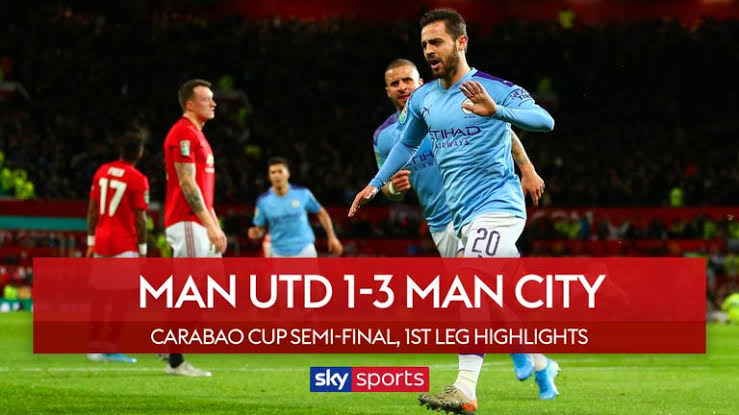 United were 3-0 down at the break, going on to lose 3-1, with Solskjaer saying his players’ heads dropped after Bernardo Silva’s 17th-minute opener.

“From 15 minutes to half-time was the worst we have played this season,” said the United boss.

“We couldn’t cope with the setback. Now we have a steep mountain to climb.”

Riyad Mahrez’s 33rd-minute second was followed by Andreas Pereira’s own goal and at half-time, it seemed a completely outclassed United were set for a repeat of their embarrassing 6-1 home defeat by City in 2011.

Instead, the introduction of Nemanja Matic for Jesse Lingard brought some stability to the home midfield and Marcus Rashford’s fourth goal in Manchester derbies adds at least some jeopardy over who will go on to meet Leicester or Aston Villa in the final on 29 February.

“It’s not three points and it’s not done,” said Guardiola.

“They are a dangerous team. Last season they lost by the same number of goals at home to PSG, went to France and qualified.”

The defeat was United’s third in their last six games, following Premier League losses at Watford and Arsenal.

Before they go to City for the second leg on 29 January, United must play Wolves in their FA Cup third-round replay on 15 January and four days later visit runaway Premier League leaders Liverpool.

In contrast to United, City have now won eight games out of nine, the only break in the sequence coming at Wolves on 27 December, when they played 80 minutes with 10 men after goalkeeper Ederson was sent off.

Yet, rather than feel his side are in their best form of the season, Guardiola detects tiredness after five games in 12 days.

“The way we have been playing is good, not far from last season,” he said. “But the team I see is a little bit tired. The schedule has been a lot for these guys. It’s crazy honestly.”