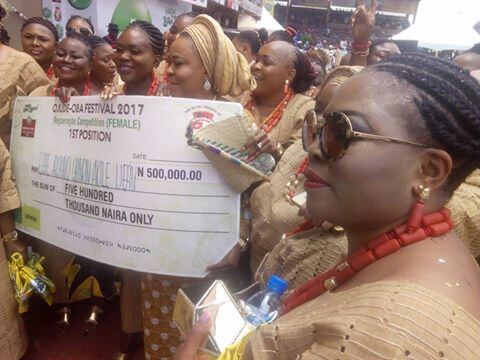 Egbe Arobayo Obinrin Akile Ijebu,  whose members were born between 1968 and 1970, was one of the happiest Ijebu Age-grade  groups on Sunday, 3rd of September, 2017, as the club emerged the Overall winner in the female Category of the historical parade that took place in Ijebu Ode. The parade was to mark this year’s Ojude Oba. Egbe Arobayo beat 43 other age-grade groups to clinch the first position.

The parade is one of the high points of the annual Ojude Oba as it allows many Ijebu sons and daughters to showcase their special colourful and beautiful Aso-Ebi to the admiration of more than 20 thousand guests, who always storm the Awujale Pavillion, where the Ojude Oba always takes place. The aso-ebi is always a special feature of the festival  because it takes about a year to decide  what to wear (fabric), which shoes to match the fabric. What jewellery to adorn among other issues to appear spectacular at the festival.  Though, you see them adorning the same attire, but there is no doubt that much energy and cash must have been expended to achieve the  colourful event that is on parade every year.

Though, it is no longer news that Egbe Arobayo Obinrin Akile Ijebu won at this year Ojude Oba, perhaps, we should tell you many things that stood them out of all the Regberegbes at the festival. One of the features that stood Egbe Arobayo Obinrin out this year was their choice of Aso-oke. Their Aso-Oke,  an Ijebu brand, which the Ijebu’s progenitors used to spot to display class and opulence.

The old champagne gold `Sanya,` which was modernised by one of the most sought-after fabric merchants, “Morufat Kalejaiye,“ who owns Morkaz Fabrics. The Sanyan, which was specially  designed for Egbe Arobayo  became a winning stunt. They also used traditional coral beads to boost its aesthetics, as they adorned the same shoes and bags that complemented their fabric. Besides, the group also boasts of vibrant, beautiful, and enterprising young babes, who enabled it to contract one of the best make-up artists, who did magic  on members.

Though, they were not the first set of Regberegbe  to go on parade that day, they were about the  6th regebregbe that was called to pay homage to Awujale. Immediately they stood, Egbe Arobayo showed that they  were very organised as they walked, talked. The Iyalode of the group, Taiwo Aderewa Odumosu, walked with the other 64 members. Their Iya-egbe, Otunba Sade Adesoye, was also on ground to cheer them as they walked tall to pay homage to Kabiyesi.

Those who know Otunba Sade Adesoye, the diamond merchant and CEO Jewellery Affairs,  are aware that she is the owner of one of the most sought-after diamond stores in Lagos as she is always a cynosure at any event she attends. The pretty woman, who owns the heart  of an  Ijebu billionaire , Chief Gboyega Adesoye, is a fashion buff and she ensured that her Egbe stood out from others.

City Peoples’s investiagtion revealed that this Philathropist bought Aso-Oke for members of her group at  45 thousand naira per member and made sure the 65 members wore it. She also made the beads, which they adorned. Alhaja Risikat Afolasade Adesoye as she is fondly called was a cynosure, shining in   a yellow gold special `HOH`, specially designed aso-oke, which she spotted with the best Diamond Enstrusted with Gold Jewellery set as she marched with Egbe Arobayo to pay Homage to Oba Sikiru Adetona, the Awujale of Ijebu.

The high point of the parade of Egbe Arobayo that earned them victory was the removal of their headgears to reveal a traditional “Suku” hairstyle  frilled with “Iyun” beads, which all of them spotted that attracted admiration of guests and induced ovation of all. Many of the judges fell for the stunt of the  `Suku Aladimole,“ which is a traditional hair style. It earned them marks that won the cash prize of N500,00. which was presented to them by the Governor of Ogun State, Ibikunle Amosun.

Do you know who is Baba Egbe of “Arobayo Obinrin? It is no other person than another Ijebu billionaire and Paper Merchant, Otunba Laide Fowosere, the handsome husband of Alhaja Latifat `O`Baby. This Regberegbe is highly favoured you say! Their Baba Egbe is also spoiling them silly. For winning at the parade, he has ordered a special Hummer bus,  which will have a special plate number “AROBAYO6870”.  It will be used to convey them to event venues  whenever they have any social outing.