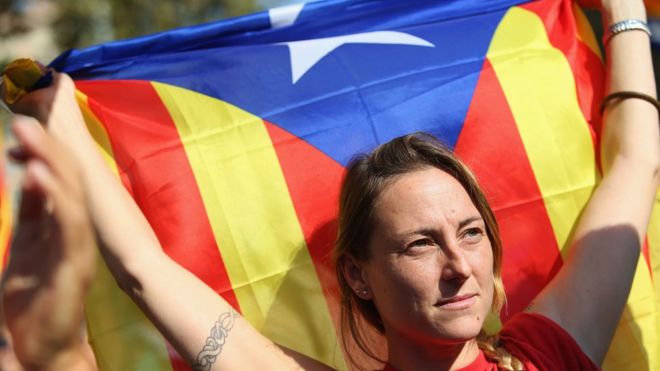 Eight sacked Catalan ministers have been remanded in custody by a Spanish high court judge over the region’s push for independence. Prosecutors had asked the judge to detain eight of the nine former government members who turned up for questioning in Madrid.
They are accused of rebellion, sedition, and misuse of public funds. The state prosecutor has requested a European arrest warrant for ousted Catalan leader Carles Puigdemont.
The request also covers four other dismissed Catalan ministers who did not show up. Spain has been gripped by a constitutional crisis since the referendum was held on 1 October in defiance of a constitutional court ruling that had declared it illegal. Last week, Spanish Prime Minister Mariano Rajoy imposed direct rule on Catalonia, dissolving the regional parliament and calling local elections for 21 December.
This came after Catalan lawmakers voted to declare the independence of the affluent north-eastern region. The Catalan government said that of the 43% of potential voters who took part in the referendum, 90% were in favour of independence.
Those detained include Deputy Vice President Oriol Junqueras, Interior Minister Joaquim Forn, Foreign Affairs Minister Raül Romeva, and Justice Minister Carles Mundó.
Former Business Minister Santi Vila was granted bail at the request of prosecutors. He resigned before the Catalan parliament voted for independence on Friday.
-BBC News
Eight Sacked Catalan Ministers Sent to Prison in Spain was last modified: November 2nd, 2017 by Arinze Ago