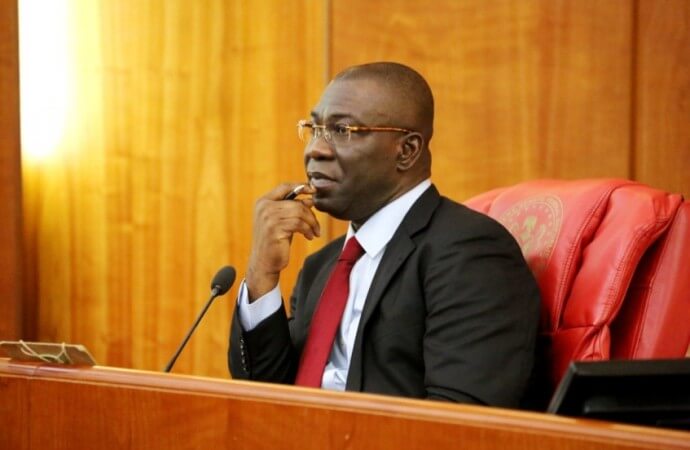 The Deputy Senate President, Dr Ike Ekweremadu who allegedly came to the office of Economic and Financial Crimes Commission, EFCC, on Tuesday Morning (10:am), is currently answering questions on corruption and abuse of office.

Ekweremadu, yesterday said that he depends on God who has always been with him and will continue to be there for him inspite of any ordeal he may be going through in the hands of the government of the All Progressives Congress, APC.

Ekweremadu has however assured his supporters that his current travails in the hands of the federal government would end in praise.

According to the deputy Senate President, he has absolute faith in God as he had done nothing wrong to warrant the continued harassment by the security agencies and the Economic and Financial Crimes Commission, EFCC.

Ekweremadu spoke yesterday when the Archbishop of Enugu Province, Anglican Communion, Most Rev. Emmanuel Chukwuma, led a delegation of clergies of Enugu Diocese of the Church on a solidarity visit to his Enugu residence Sunday evening.

In a statement by his Special Adviser, Media, Uche Anichukwu, Ekweremadu said: “When people say they are not sure there is God, I say, ‘Come, let me tell you my story; when I finish my story, you will know whether there is God or not’. My story is one of those that establish actually that there is God. So, what you are seeing now will also pass because there is no battle that God cannot fight for me.

“There have been several attempts to remove me as the Deputy President of the Senate, but, I am not worried because it is God that gives power and it is only Him that can take it.

Ekweremadu who recalled that he had never been in a position to manage public finances or award contracts all through his political career, said, “I have been a town union president, Chairman of a local government, Chief of Staff and Secretary to the State Government, Senator since 2003, Vice Chairmen and Chairman of several committees, Deputy President of the Senate since 2007, and I have been Deputy Speaker of the ECOWAS Parliament before I became the Speaker. Today, I am a Member of the Global Parliament for Tolerance and Peace. In all of these, I have never managed government resources or finances or being in a position to give contracts or receive contracts.

“When I was local government chairman, I allowed the Secretary of the Council to run the affairs when it comes to giving contracts. When I was Secretary to the Enugu State Government, I refused to be part of the tenders board because of things like these.

“When I became the Deputy President of the Senate in 2007, there was something they used to call the Body of Principal Officers that awarded contracts. I told the President of the Senate that we had to stop it and let the National Assembly Management deal with contracts, and that if it was to continue, I was not going to part of it. He saw my point and agreed with me.

“All the oil and election probes they have done in Nigeria, nobody can mention my name. The money they pay me for my services has always been enough for me. If you have any proof that I stole government money, I challenge you to come out and say it. I have never ever even been in a position to do that.

“So, my hands are clean. But if the EFCC wants me to come and answer that, I am prepared to answer any call from anybody as a responsible citizen. Even at that, I will continue to advocate justice, rule of law, and equity”.

Ekweremadu who noted that he had no personal quarrel with anyone, wondering why the desperation to annihilate him politically, said, “In all my statements, my position on things that have happened in Nigeria, I have always meant the best for Nigeria. I have never for once, personally attacked anybody, including the President.

“I have been worried about the security situation and the injustice that is accompanying the programmes of the government. Those are the issues I have always addressed and I have tried to be as objective as possible.

“So, why the government or its agencies or the party that is in power feels that I am a threat is what I don’t understand. For as long as you are in government, you are supposed to be democratic.

“I don’t have one personal problem with anybody, but because of my position on some of these things, people have tried to kill me. About 2015, there was an assassination attempt on my life and up till now, nobody has investigated that matter.”